Media Release: New version of Now’s the Hour opens at the Fringe 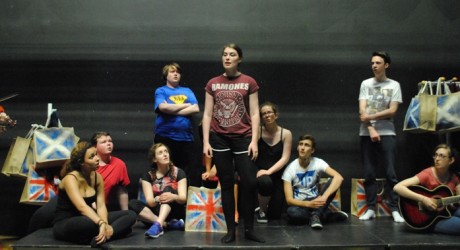 A NEW version of Scottish Youth Theatre’s funny and satirical show, Now’s The Hour – which explores first-time voters’ attitudes to the Independence Referendum – has opened at the Edinburgh Festival Fringe.

The show is created and performed by a cast of 12 first-time voters, aged 16-20 years from right across Scotland, through letters they write to their future self in 20 years’ time expressing their hopes and fears for the country, whether there is a Yes or a No vote.

Using sketches, monologues and music, Now’s the Hour explores Scotland’s history, amusing stereotypes and many contradictions, before turning the spotlight on key referendum issues such as currency, Trident, tuition fees and the economy.

The young actors try to make sense of the claims and counterclaims of both sides of the referendum debate.

The show, which is politically neutral, represents the authentic voice of a cross section of young Scots.

It is devised during the rehearsal period, around a structure which delivers theatre that is entertaining, insightful, and thought provoking.

To date, around 50 young people from Scottish Youth Theatre have taken part in different versions of the play.

Fraser MacLeod, the show’s director, said: “The essence of the show is the letters which the cast write to themselves in 20 years time expressing their hopes and fears for Scotland’s future whether there is a Yes or a No vote.

“In this new version of the play these letters have changed completely as young people gain a better understanding of the issues. There are also four new cast members with completely new opinions which weren’t in the previous version.

“The new production addresses how the referendum debate has moved on since last year. The previous production was more focussed on encouraging the young actors  to take their time and consider the arguments put to them.

“This new  production captures how, having been through this process, the young people feel overwhelmed, confused or have changed their opinions entirely.

“There is more urgency to make the right decision when they vote on Sept 18th.

“The music has also been reworked and is now played acoustically by the cast.”

Mary McCluskey, Scottish Youth Theatre’s chief executive and artistic director, added: “Now’s the Hour is the only play at this year’s Fringe which represents the authentic voice of a cross-section of young Scots as they try to make sense of the claims and counter claims surrounding the referendum debate.

“Uniquely, it does this without taking a political position or telling the audience how to vote.

“Being part of the Fringe demonstrates the important role Scottish Youth Theatre has in unlocking the creative potential, confidence and development of children and young people right across  Scotland.”