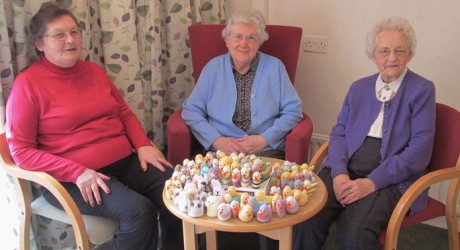 THREE tenants of Bield’s Gladstone Court sheltered housing in Perth have raised more than £1,200 for the Scotland Charity Air Ambulance (SCAA) after a mammoth knitting challenge.

Jessie Hearn, Mary Allardyce, Morag McInnes and their friend Kate Clark decided to raise money for SCAA after Mrs McInnes’ daughter was rescued by the chopper team after an accident.

Keen to acknowledge the hard work done by this charity, the trio decided they would knit Easter-themed woollen mini chicks to sell to the public through local shops in Perth for a £1 each.

Local residents and friends and families of residents also donated chocolate eggs to go with the knitted chicks as an added incentive to purchase. Once the final sum was calculated, the donation to the SCAA totalled £1,252.89.

Mary Allardyce, speaking on behalf of the ladies, said: “We are aware of the excellent work the Scotland Charity Air Ambulance does, especially after they rescued the daughter of our friend at Bield’s Gladstone Court.

“This was the main reason why we wanted to raise money for the charity.

“We were so touched by the number of people who gave cash donations or donated chocolate eggs and we couldn’t have done it without the support of the staff at Gladstone Court.

“Never in a million years did we think we would raise quite as much as we did, it is just fantastic and proves what a wonderful community spirit we have here in Perth.”

Raymond Scott, scheme manager of Bield’s Gladstone Court, said: “It is great to see our tenants here doing their bit for charity.

“We are always keen to encourage them to do what fulfils them and makes them happy. It is really important that our tenants live fulfilled, independent lives.

“It’s really great to see that so many of the little chicks sold and the amount which these ladies raised is really inspiring.

“The knitting ladies of Gladstone Court are a wonderful example that you can do anything at any age.”

The initiative is another example of Bield’s Free To Be commitment which strives to let people make their own choices about how they live their lives but with Bield being there to support them when they need it.

If you would like to donate to Scotland Charity Air Ambulance, you can do so via their website www.scaa.org.uk