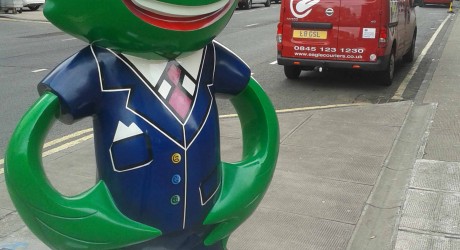 THE Commonwealth Games brought a spectacular week of sporting gold to Glasgow; however, it’s not just its athletes who have been on a winning streak.

Cynical Eagle Couriers managing director Jerry Stewart, had initially raised concerns about how road diversions could be bad for business. However, he was forced to ‘eat his words’, hailing the organisation of the road diversions a seamless success, thanks to Get Ready Glasgow.

Eagle Couriers were given early insight in their scheduled road planning for the Games, this enabled them to put in place contingency plans to ensure they maintained their high standard of customer service.

Get Ready Glasgow, the campaign to help people who live, work and play in Glasgow understand how their day-today would be impacted by Glasgow 2014, was branded a success by the firm.

Managing director at Eagle Couriers, Jerry Stewart, said: “I absolutely have to take my hat off to the faultless service from Get Ready Glasgow.

“I had met with them before the Games as I had real concerns about how the traffic disruption could slow down business for us, which in our line of work would have had a really detrimental effect.

“The service provided by Get Ready Glasgow was fantastic as they held various seminars at Glasgow City Chambers and answered any concerns businesses had.

“I have to admit I was a bit cynical about how they were going to manage the traffic flow in the city but am delighted to say that business was helped to boom in by the superb management of it all.”

Jerry added: “It was a real honour to play our part in such a triumphant week for Glasgow and I know our drivers were really excited to be driving around the city and soaking up the buzz.

“It’s been a fantastic time for Glasgow and our people really have shone in the global spotlight, we’d like to thank everyone at Get Ready Glasgow for their fantastic support.”

Eagle Couriers is Scotland’s biggest independent courier company has 20 members of operational staff across Scotland and a 100-strong team of couriers. It has its HQ in Bathgate,West Lothian and additional offices in Edinburgh and Glasgow.

The company provides safe and quick logistics services to organisations across the private, public and third sectors as well as working directly with consumers and boasts a 3500 strong client base including the BBC, the Government Procurement Service and the NHS.