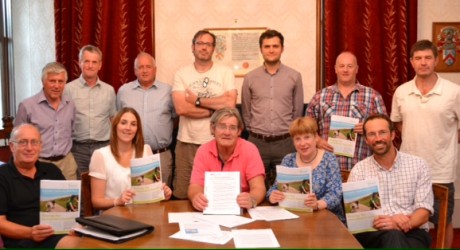 A GROUND-breaking new partnership between community councils, local estates and a respected developer is seeking to provide positive answers to some of the key challenges facing North Carrick.

The Community Councils of Maybole, Dunure and Kirkoswald, Maidens and Turnberry are launching a major community consultation exercise on the regeneration proposals for North Carrick over the next three months, which includes a community wind farm. They hope to secure overwhelming support for the proposal that will guarantee the delivery of local action plans that have been developed by the communities over the last 18 months and will drive massive economic and social benefits into the area.

The three Community Councils have been working directly with the Cassillis and Culzean Estates and Hamilton-based developer, Banks Renewables, since the plans were initially discussed at Maybole Town Hall on 28 April, and thereafter approved ‘in principle’ by each Community Council.

The partnership held its latest meeting on 24 July in Maybole Town Hall and backed the communities’ proposals for a wide-ranging and extensive local consultation exercise to kick off in August.

This will include a number of public events and the Community Councils will be advertising these locally as well as in the press in the very near future.

Following formation of the partnership, a new company called North Carrick Renewables, has been set up, which, if feedback from the community consultation supports the proposal, will formally partner with the communities and submit a community wind farm planning application later this year.

Stuart Telfer, spokesperson for Kirkoswald, Maidens and Turnberry Community Council, said: “What excites me most about these proposals is that it represents a genuine partnership between a respected developer, our own local estate and our community.

“There are always going to be mixed opinions about wind farms, but the bottom line is that we can’t live without energy and must start making our resources renewable. If we can do this while also bringing in investment to regenerate the area, then it really is a win-win situation.

“By allowing local people to get involved right from the outset, it means that we can help steer the plans in the direction that’s going to benefit local people the most. I’m looking forward to getting out into the community to hear what local people want and hope that this will result in a development that will be a long lasting asset to North Carrick.”

Stuart added: “All too often big developers steam into small communities without truly consulting them in relation to their plans. This partnership is different and is a breath of fresh air, giving community councils a real platform to make a difference.”

The community wind farm proposal at Knoweside Hill, south-east of Dunure, gives the local communities a direct stake in the eight-turbine project, which would result in an estimated £9.5 million of community revenues over 25 years, which would fund the delivery of a range of specific projects prioritised by the communities within recently-approved Community Action Plans.

Each local community council will now carry out a series of public exhibitions and events within the area to get detailed feedback from locals.

The Community Councils have stressed the need support the local economy and businesses and the application when submitted will now include key commitments to offer local firms the chance to tender for the construction and maintenance contracts associated with the project. This would see contracts worth millions of pounds awarded to firms based across Carrick and wider South Ayrshire.

Mark Fletcher, spokesperson for Maybole community council, said: “It is fantastic to see that both the developers and the land owners are going about the planning process in such a responsible way and place so much importance in getting the local community councils involved.

“This is such a rare opportunity for local people to get involved in an exciting project, which could completely regenerate the area. I would urge people to come along and talk to us about how they would like to see the site develop as now is the time to have their voices heard.”

As part of its commitment to the Partnership, Cassillis and Culzean Estates will undertake a major reinvestment programme across the Estates if the community wind farm is approved. This will ensure the Estates long-term sustainability, as well as creating employment for local people and delivering a major boost to the local economy.

Colin Anderson, development director at Banks Renewables, said: “Banks is committed to supporting increased community involvement in its projects and with this proposal, which I think is unique in its approach and the wide ranging benefits it will deliver across North Carrick, we may be defining “best practice” for sustainable development.

“The formation of North Carrick Renewables and the Community Partnership that supports it is fantastic and now paves the way for a truly fantastic project to be delivered, should the public consultation support the community councils’ recommendation.

“All the local community councillors I’ve met are passionate about making a difference in their towns and villages and have actively helped develop the plans for the community wind farm, at the same time as they’ve produced their community action plans. These become deliverable should the community wind farm be approved and in my view makes this unique proposal truly sustainable.”