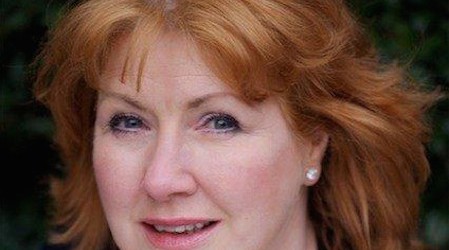 She will chat live in the studio to hosts Phyllis Joyce and David Boyes about the play 3,000 Trees, written by George Gunn, which she directs and which runs at the Edinburgh Festival Fringe run until August 24 at the Gryphon venue.

Libby, who was born into a working-class family on the south side of Glasgow and embraced the principle of ‘service to others’ at an early age, has also appeared in Taggart, Looking After Jo Jo, Doctor Finlay, Take The High Road and Rab C. Nesbitt.

When she was just 14, she had her own drama group in the city’s Gorbals area.

By 21, she was a drama supervisor with the Youth Training Scheme (YTS), taking several groups of young people from writing and performing into full-paid work. And during Glasgow’s City of Culture celebrations in 1990, she became drama worker-in-residence in Blackhill.

A true lover of her country and her home city, she believes in the restorative powers of creative storytelling.

Says a spokesperson: “3,000 Trees concerns the death of Glasgow lawyer, Willie McRae – a former vice-president of the Scottish National Party and an anti-nuclear campaigner – who was found dead at the wheel of his car in Sutherland.

“At first, it appeared he had veered off the road and crashed in a burn but the later discovery of a gun and a bullet wound to his head led police to conclude he had killed himself.

“However, it had been fired twice and conspiracy theories were fuelled when it emerged the book McRae was writing, and his briefcase containing key documents, were missing.”

The spokesperson added: “Neither McRae’s medical reports nor the post-mortem data have ever been revealed.

“Nor has there ever been a fatal accident inquiry. McRae was also the author of the maritime law of Israel and emeritus professor at the University of Haifa. After his death, a forest of 3,000 trees was planted in Israel in his memory, hence the name of the play.”

Phyllis said: “Libby is a true Scottish talent – and someone who has something to say about a host of topics. She has become a household name in the land but she remains true to her roots and her working-class upbringing.

“This is further proof that the Talk To Phil & Dave Show is making people sit up and listen.

“Our mix of conversation, agony aunt advice, live counselling, music and other original features is like nothing else on radio right now, and we are committed to pushing an agenda for the listener.”

David added: “Against the backdrop of the exclusion of independence-themed productions at the main Edinburgh International Festival, Libby’s interview with us is going to be interesting.”

The two-hour Talk To Phil & Dave Show airs live every Tuesday at 2pm and addresses serious issues affecting the lives of ordinary people in an unchallenging, down-to-earth setting while at the same time delivering a light-hearted entertainment package.

Hosted by body-centred therapist and counsellor Phyllis Joyce and journalist and media consultant, David Boyes, the programme first hit the airwaves in November 2013, with the aim of turning the spotlight every week on new topics of interest to listeners.

It is augmented by the TalkToPhilNow website, which acts as a gateway to the show and which hosts helpful information in a number of media formats.

Pulse, which transmits on the 98.4 FM frequency, is a community radio station based in Barrhead, near Glasgow, UK, broadcasting to all of south Glasgow, the city centre, East Renfrewshire, Paisley, Renfrewshire and Clydebank and online.

Adds the spokesperson: “Pulse is professional in its approach and it has no set music policy, allowing it to give exposure to a wide range of styles and artists.

“Pulse 98.4 is also available online at tunein, which lets listeners around the world access 70,000 live global radio stations, with music, sports, news, talk, and comedy streaming from every continent. It also has more than two million on-demand programmes, from podcasts to concerts to interviews.”