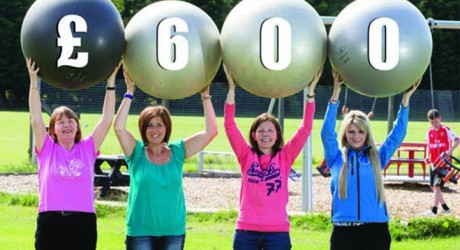 A COMMUNITY group is in a race against time to hit their fundraising target to build an extension to a children’s playpark.

The Inchinnan Community Playpark and Garden Association needs to raise another £1,600 by the end of this month, so they will have reached £19,000 to take advantage of an offer of half-price outdoor fitness equipment.

Now, a new fund that will give a cash boost to local charities and community groups has stepped in to help out with the Renfrewshire villagers’ fund-raising efforts.

Soar at intu Braehead launched a community fund and has agreed to donate £600 to the Inchinnan community group who want to extend their kiddie’s playpark for six to 12-year-olds with an outdoor gym for teenagers and adults.

The popular leisure destination plans to donate hundreds of pounds to good causes in the west of Scotland between now and the end of the year.

Charities and community groups to apply to the fund for single donations up to a maximum of £600, outlining how the money would be spent and how the cash would benefit their local community.

Margaret O’Neill, is chair of the Inchinnan group and she explained: “We previously raised £30,000 to build a kiddies playpark and now we want to create something for teenagers and adults by building an outdoor gym.

“We have the offer of half-price outdoor gym equipment, but that’s only available until the end of August.

“The donation from Soar at intu Braehead is much appreciated and it’s great they are creating a fund for charities and community groups.”

Operations manager for Soar, Ian Anderson, said: “There’s great work being done in communities by the many small charities and community groups out there. And with a little more financial help, they could do even more.

“Soar at intu Braehead is very much part of the local community and we want to help those who are helping others in our community.”