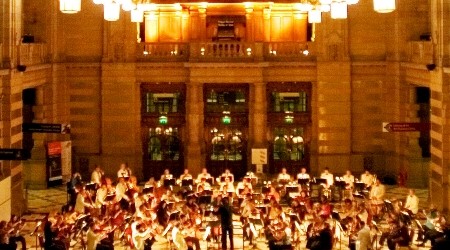 BREWIN Dolphin, one of the UK’s leading providers of personalised wealth management services, has joined as title sponsor of the Royal Scottish National Orchestra’s Kelvingrove concert series for 2014.

Kelvingrove Art Gallery and Museum, which houses one of Europe’s great civic art collections, reopened following extensive refurbishment in 2006, and each September since the refurbishment the orchestra has performed two late-summer concerts in the main hall.

This year, Brewin Dolphin is lending its support to the series, which sees Spanish conductor, Jaime Martín, make his RSNO début.

Stephen Martin, head of the Brewin Dolphin Glasgow office: “We are proud to be supporting the Royal Scottish National Orchestra and its Kelvingrove concert series, which has proved such a success since its inception in 2007.

“The combination of Scotland’s national orchestra and the one of the nation’s great art collections makes for an irresistible evening of culture.”

On this occasion the Orchestra, joined for the first time by Jaime Martín and soprano Ailish Tynan, present Music at the Museum, featuring extracts from some of the most popular operas of the last 200 years (Madama Butterfly; Carmen; Tosca; La bohéme; Cavalleria rusticana; Romeo & Juliet).

The programme is specially created to make full use of the generous acoustic and dramatic setting of Kelvingrove Art Gallery and Museum’s main hall.

Conductor, Jaime Martín: “I am very much looking forward to making my RSNO debut in September, and to be performing in one of Scotland’s iconic buildings.

“I am delighted to be joined by the wonderfully talented Ailish Tynan for what promises to be an evening to remember.”

Brewin Dolphin presents Music at the Museum at Kelvingrove Art Gallery and Museum, Glasgow on Friday 5 and Saturday 6 September.

The RSNO’s 2014:15 Season opens with Oundjian Conducts Scheherazade, at the Music Hall, Aberdeen on Thursday 2 October, Usher Hall, Edinburgh on Friday 3 October and at the Glasgow Royal Concert Hall on Saturday 4 October.