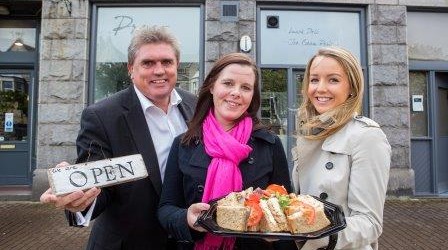 A POPULAR Aberdeen deli is set to re-open less than three weeks after it was hit by a major fire.

Prego on the city’s Fountainhall Road will resume normal business today (Wednesday, August 20) after it was forced to close when a fire broke out in its ground floor kitchen.

Begins a spokesperson: “The blaze, which was sparked by a gas leak from an oven, caused extensive smoke damage to the building, with the restaurant’s cooking range and vents completely ruined as a result.

“Firefighters had battled for more than half an hour to bring the fire under control as it threatened to spread, with the adjacent road shut between Queens Lane and Carlton Place as a result of the incident.

“The owners have praised the quick reactions of his staff after they moved swiftly to turn the gas and electricity supply off, helping prevent the fire from spreading to other parts of the building.”

Company director, Allan Henderson, said: “I was obviously incredibly disappointed that the fire broke out but I’d like to thank the staff who were working that morning, as it was their quick thinking, along with the fantastic work of the emergency services, that really did save the fire from spreading further.

“The damage was extensive. We’ve had to replace all the kitchen’s flooring and wall coverings, as well as replace the cooking range and vents that were ruined by the blaze.

“Although this was at a considerable cost, I’m delighted that no-one was injured during the accident; it really could have been a lot worse.

“The team have been working literally through the night to get the deli back up and operational and we’re delighted we’ve managed to turn things around in under three weeks.

“It’s been a great effort by the staff and we’re looking forward to business being back to normal in the coming weeks.”

Prego is located on Fountainhall Road in Aberdeen’s West End and provides a wide range of dining options including breakfast and brunch, a lunch deli and an ice cream parlour.

To view the full menus and for further information, please visit http://www.pregoaberdeen.co.uk/