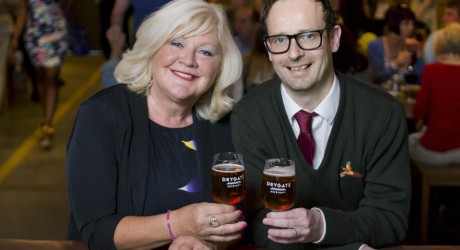 NOW in its 30th year, Scotland’s longest-running comedy club – The Gilded Balloon – is expanding west, with the launch of a brand new comedy club in Glasgow, beginning Friday 29th August.

Hosted in collaboration with Drygate Brewing Co – recognised as the UK’s first experiential craft brewery – Gilded Balloon Comedy at Drygate looks to bring together the very best craft beer and comedy under one roof.

Dinner and comedy packages will see resident craft beer kitchen and bar – The Vintage at Drygate – as front of house hosts, serving a pre and post-show menu that includes beery mussels, rump steak and artisan cheese boards alongside a 200-strong bottle list.

Gilded Balloon artistic director, Karen Koren, explained more about the club: “It’s been 20 years since Gilded Balloon had a regular venue to present comedy in Glasgow and we’re really excited to be joining up with Drygate and The Vintage.

“Drygate is the ideal environment where audiences will be able to experience first class comedy, food and craft beer all under one roof. We’re looking forward to a long association with Drygate and bringing regular comedy back to the west coast.”

Darren Blackburn – director of The Vintage at Drygate – spoke more about the partnership: “When Drygate opened its doors in May, The Vintage craft beer kitchen and bar jumped at the opportunity to expand west from our founding restaurant in Leith, Edinburgh.

“The Gilded Balloon expansion continues this theme of collaboration, expansion and talent finding a home here at Drygate.”

Tickets for Gilded Balloon Comedy at Drygate are on sale now from £15:

Gilded Balloon Comedy at Drygate takes place every Friday from 29th August across two sessions: 7.30-9.30pm and 10pm – 12am.

Tickets are priced as:

Pre- and post-show dinner must be booked in advance. Dinner packages redeemable with a valid show ticket.

Launched on Friday 23rd of May 2014, Drygate is the UK’s first experiential craft brewery.

As the UK’s first experiential craft brewery, Drygate includes a 24 tap beer hall, an elevated beer garden, a bottle shop, a multifunctional venue space and a craft beer-inspired menu created by the award-winning team from The Vintage.