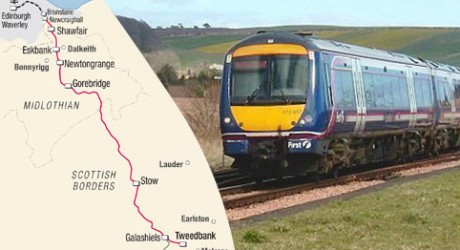 THE Campaign for Borders Rail today broadly welcomed the raft of announcements, by First Minister, Alex Salmond, including the opening date for the railway.

Answering the First Minister’s announcements, made today at the site of the railway’s terminus in Tweedbank near Galashiels (http://news.scotland.gov.uk/News/Full-steam-ahead-1010.aspx), the Campaign for Borders Rail chair, Simon Walton, said: “I’m delighted that the community, business, tourism and government are united behind the Borders Railway Project.

“It’s gratifying that so many recommendations made by the Campaign for Borders Rail are being actively discussed.

“The study of tourist potential is very welcome news. Turning facilities and other infrastructure at the Tweedbank terminus would be an excellent enhancement for leisure steam train operations and tourism potential. Integrating the National Mining Museum into the project with a direct footpath link from Newtongrange station is eminently sensible, and reiterates the attraction of Midlothian too.

“Lengthening the platform at Galashiels to accommodate charter traffic will help the town engage more fully with the leisure market.

“Many of these tourism-related developments would not have been possible without our campaign’s determination and perseverance.

“We share the view that the line will be an overwhelming success, and we still actively argue for sufficient capacity to be built in as early as possible.

“Our committed aim is to see the line established as a through route, carrying long-distance trains between Edinburgh, the Borders, Carlisle and beyond.

“The longer platform at Galashiels is an example of infrastructure built now that is truly future-proofed. We would urge that the First Minister’s tourism feasibility studies announcement be extended in scope to examine these benefits too.

“With the announced opening on 6 September next year, we genuinely do have a date to look forward.”

The Campaign for Borders Rail (CBR), launched in 1999, is one of Britain ’s most successful grassroots rail campaigns. CBR’s key aim was realised on 6th November 2012 when the Scottish Government’s Transport Minister, Keith Brown, announced that Transport Scotland and Network Rail had concluded a deal to construct the new Borders Railway – bringing trains back in 2015 after an absence of more than 45 years.

CBR lobbying was also crucial to securing key enhancements to the original official railway specification – namely (i) inclusion of a station at Stow, and (ii) redesign of Tweedbank station to accommodate long tourist charter trains, bringing in visitors from across Britain.