Media Release: North-east decorating firm tees off for worthy cause 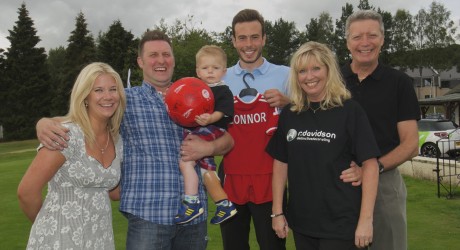 AN Aberdeenshire painting and decorating firm has successfully raised over £15,000 for a toddler with a debilitating medical condition by hosting a charity golf day.

R Davidson, which is based at Brathens Business Park in Banchory, held a charity golf day on Thursday (14 Aug) at Banchory Golf Club, with 33 teams taking part to fundraise for youngster, Connor Yates, who was born with a condition called Fibular Hemimelia.

Connor’s grandmother, Denise Brown, works for R Davidson, and the company wanted to raise funds for 16-month old Connor, as he will be reliant on prosthetic limbs for the rest of his life after the lower part of his leg was amputated when he was 12 months old as a result of the condition.

All of the money raised from the golf outing will go towards purchasing sports prosthetic limbs for Connor to help him lead a more active life, as he grows older.

Owner and managing director of R Davidson, Trevor Mutch, said: “We are over the moon to have raised so much money from just one event.

“It was a great day with 132 golfers competing and enjoying the course, hospitality, and importantly, supporting a very worthwhile cause. Denise has been a key member of staff at R Davidson for over ten years, so I wanted to organise something locally to support the family and put a smile on Connor’s face.

“As it was such a success, we are already planning next year’s event to support the local community. It’s great to be able to give something back, particularly to such a loyal colleague as Denise.”

Denise, continued: “I am delighted with the amount raised for Connor.

“This will go a long way to ensuring that he lives as normal a childhood as possible.

“I would like to thank everyone who was involved in the lead up to the event, and on the day itself, it was a great day, one I will always remember.”

Professional footballer and local lad, Andrew Considine, from Aberdeen Football Club, was also in attendance to help fundraise and hand out prizes to competitors, which included a Mini Cooper for a hole in one.

The painting and decorating firm, which is one of the North-east’s longest established home improvement contractors, has a wide range of private and commercial clients in Aberdeen and the North-east and has worked on some of Aberdeen’s most prestigious developments, including the renovation of the city’s Marischal College, Chester Hotel and Prime Four sites.