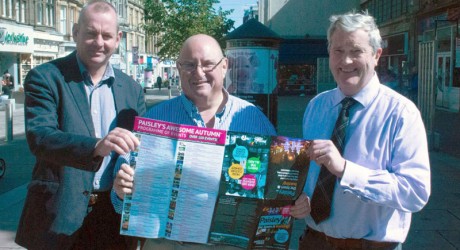 THE group behind a move to make Paisley a Business Improvement District has launched a campaign to promote scores of events in the town between now and the end of the year.

The Paisley First initiative has produced and will distribute 25,000 copies of the ‘Awesome Autumn’ events guide, encouraging people to come to Paisley town centre.

The free glossy guide also includes a Paisley business directory with contact details and a map of the town centre showing various landmarks.

The guide features information on events such as concerts, exhibitions, Paisley Film Festival, theatre and comedy shows, The Spree, the annual fireworks display and the Festive Lights switch-on.

It will be available for anyone to pick up at various restaurants, bars, cafes, shops and other businesses throughout the town centre.

The Paisley First Steering Group is a made up of local traders who are encouraging town centre businesses to vote to set up a Paisley BID company in a ballot due to be held in October.

An elected board of directors working to encourage more people to come to the town centre by organising events and other marketing and promotional initiatives would run the Paisley BID.

The BID would also act as a voice for local businesses and as a buying group to get cheaper utility bills.

He said: “We’re using the catchphrase, Paisley’s Awesome Autumn, to get over the message that the town has the largest events and entertainment programme in the west of Scotland, outside Glasgow.

“We decided to produce the events guide and business directory to give people an idea of what a Paisley BID can do to promote the town centre.

“This may seem like a one-off initiative, but if the Steering Group can do this, just think how much more can be achieved if a Paisley BID is set up.

“That’s why we are encouraging businesses in the town centre to vote to set up a Paisley BID.”

Ken added: “One of the ways to increase footfall in the town centre is to give people a good reason to come back to Paisley and a regular programme of entertainment and events is one way of doing that.

“This kind of initiative will be a major strand in the Paisley BID strategy to revitalise Paisley town centre.”

“If we can set up a Paisley BID, I have no doubt the town centre will benefit greatly and so will shops and businesses.”