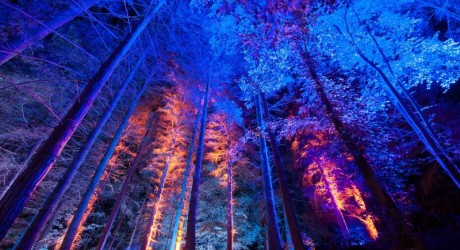 ORGANISERS of The Enchanted Forest, a Perthshire Big Tree Country event and Scotland’s multi-award winning sound and light show and recently crowned Scotland’s Best Cultural Event, confirmed today that ticket sales for their 13th show have already surpassed last year’s record breaking box office figures and that they are now on target to extend a warm Highland welcome to more than 45,000 visitors this year.

The event attracted a record breaking 40,000 visitors last year and this year the Highland Perthshire Community Interest Company that organises the event extended capacity, adding on an extra night to help accommodate the growing demand.

Organisers are now encouraging members of the public, specifically those planning to attend in the final week of the show, that there are only several hundred tickets remaining for this year’s show and they should buy their tickets now or they risk having to wait until 2015 to see the event.

“The demand for tickets at box office this year has been unprecedented. Sales are up significantly on the previous year, and the speed at which they have been selling has really taken everyone by surprise. Our box office team have been working day and night to fulfil demand which has been at levels three times higher than we would normally expect. We are fast running out of available tickets so, to avoid disappointment, we’d advise anyone who has left it to the very last minute to book not to take it for granted and to book now.

“Every year we have a lot of people who travel significant distances to attend the event without purchasing their tickets in advance, and we’re keen to ensure that everyone has a positive trip to Pitlochry and that they get to see the show.”

The event attracts visitors from all over the UK and, indeed, the world and the positive economic benefit to the local area this year is estimated to exceed £2million for the first time in the show’s history. Just last week, the event won a trio of trophies at the Scottish Event Awards, taking home the title of Best Cultural Event for an impressive third time. It has also been recently shostlisted for a covered Scottish Thistle Award for Best Event and Best Outdoor Expperience, although will have to wait until November to find out its fate.

The 2014 show ‘elemental’ was designed by a creative team led by Derek Allan, producer of The Enchanted Forest, including Scottish lighting designers Kate Bonney and Simon Hayes, and sound by RJ McConnell Jon Beales.