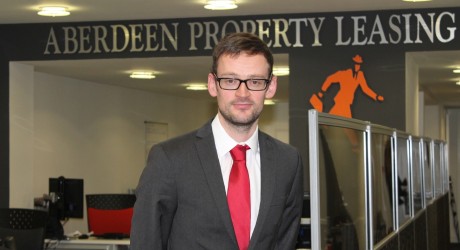 A LEADING North-east property leasing firm has strengthened its management team with a key internal promotion.

Aberdeen Property Leasing (APL), which has been operating in the North-east for more than 35 years, has promoted Spence Alsop to director, following nearly a decade working for the firm.

Mr Alsop, 31, who first joined APL in 2005 working as a leasing coordinator over the summer months, has worked his way up the career ladder building extensive knowledge and experience of the property industry. The former Cults Academy pupil graduated with a degree in accounts and finance from the Robert Gordon University before switching his career path.

Sales director at APL, David Lamb, said: “Over the last nine years, Spence has proven himself to be an extremely dedicated member of the team and we are delighted to have him now in the role of director. In his time at APL, Spence has developed a wealth of knowledge and understanding of the Aberdeen property market, which will play a key role in the future of the business.

“His promotion comes at a time, as we continue to grow and expand our property portfolio and enhance our overall service offering.”

Mr Alsop, said: “It is great achievement to be promoted to director so early in my career, especially as I will be marking my ten-year milestone with the firm next year. I look forward to continuing to work with my colleagues and loyal clients, as well as new customers, to ensure that they get the best possible service.”