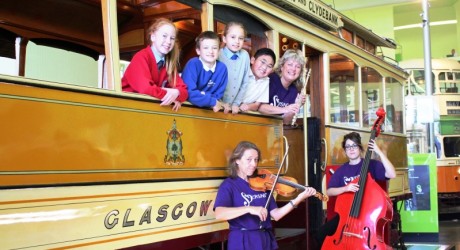 ON Friday 24 October, over 120 primary school children from the Glasgow area joined Scottish and Canadian orchestral musicians at the city’s Riverside Museum in a cultural commemoration of the First and Second World Wars.

Musicians from the Royal Scottish National Orchestra (RSNO) and Canada’s National Arts Centre Orchestra (NACO) joined forces to deliver an interactive day of listening and creating, designed to inspire pupils. Inspire Day was led by musicians from the RSNO and NACO, where pupils explored musical concepts around the theme of war, with a specific focus on WW1 and WW2.

The primary seven pupils were given a guided tour of the WW1 and WW2 themes in the museum. They were then treated to performances by a RSNO quintet of musicians and NACO’s Horn Quintet, and during the performances they created their own drawings and paintings whilst being inspired by the music. The pupils and musicians then collaborated to create new works of music with themes taken from their original artwork.

RSNO director of Learning and Engagement, Jenn Minchin: “This was a tremendous opportunity to join with our visiting colleagues from Canada’s National Arts Centre in bringing an interactive project to the region’s primary school pupils. Using creative arts in the process of learning, in this case understanding significant historical events, the participants develop a greater connection with the subject matter.”

Genevieve Cimon, director of Music Education at Canada’s National Arts Centre Orchestra: “Canada’s National Arts Centre was delighted to be partnering with the Royal Scottish National Orchestra, offering the Inspire Day to these children living in Glasgow. This day underscored the significance of the centenary of World War One and its relevance to young people today.  What better way to do this than through a celebration of music making?”