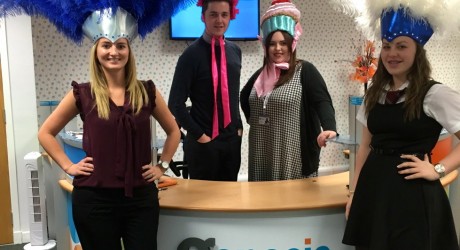 AS the festive season quickly approaches, preparations for the big day are well underway, but for five employees from a leading North-east recruitment firm, there is a lot more on their Christmas to-do list than most people.

Based in Aberdeen and Peterhead, Genesis Personnel has five talented employees who will be taking to centre stage this Christmas time for the annual pantomimes in Inverurie, Peterhead and Stonehaven.

Senior recruitment consultant, Steph Wemyss, is starring in Inverurie’s pantomime production of Jack in the Beanstalk, taking on the principal girl role as Jill, whilst Bill Barclay, who heads up the driving and logistic division, stars in this year’s space themed Christmas panto in Stonehaven. Lynn Sandison, Chelcie Grant, and Alasdair Corbett also take on various roles in the Peterhead production of the Snow Queen.

Steph, who has worked at Genesis for two-and-a-half years, started her acting career at a young age, starring in various shows and even working at Disney World, Florida in the entertainment department. With the panto staging 20 shows throughout December at the Inverurie Town Hall, rehearsals are well underway meaning Steph has to balance her time well.

Steph said: “It can be challenging especially at Christmas time when work is busy and life in general is busy, but I just have to be very organised and make sure I get my Christmas shopping done early. Rehearsals for the show have just begun which means I have a lot more to think about and I need to plan my time well, but as this is my fifth year in the pantos, I am very used to it.”

The recruitment firm, which was launched in 1975 to deliver expert and specialised recruitment solutions, also has three stars in the Peterhead panto, with Alasdair taking on the role of Harry Bo, the Doric comedy loon, Lynn as a fairy and Chelcie is the chorus mistress and chairperson for the show.

However, on top of the Snow Queen and work at Genesis, Alasdair has also recently played Link Larkin in Hairspray and will play Joey, one of the three stuges in Sister Act, which will be in His Majesty’s Theatre next year, so he has a lot on his plate.

Alasdair said: “I am not really sure how I manage to balance my time, as I am always on the go and running around like a headless chicken, especially at the moment as I am currently rehearsing for three productions. However, I am a glutton for punishment and love to be busy, as I would drive myself and everyone else up the wall if I wasn’t.”

Bill Barclay, who has worked at Genesis Personnel for over two years, is taking on the role as a computer in the Stonehaven show, Space Odyssey the panto, which is organised by the Ury Players theatre group – an amateur dramatic group that recently celebrated its 60th anniversary year. On top of his acting, Bill has also previously hosted a radio show on Mearns FM and the Grampian hospital community show.

He said: “For as long as I can remember, I have been involved with acting and performing in various shows and plays, and I also had my time on the radio. This year’s show is special, as local cast member Russell Adams has written it, so I am excited to be part of it. I love the buzz you get from performing, and although it can take up some time with extra rehearsals, it is definitely worth it.”

The five employees who all caught the acting bug at an early age, are all involved with various theatre groups and now use their performing skills to help in their different roles at Genesis.

Lynn said: “I have always liked to entertain people so one of my favourite parts is seeing the audience’s reaction, especially after you have done a good scene. I am quite a confident person but performing has definitely helped and made it easier to speak to candidates in the office or over the phone.”

Chelcie added: “This year, I am in charge of the chorus, which began with an audition and selection process, so my experience at Genesis definitely helped with this. I am now looking after 51 kids and more involved with the production team so my organisation and time management skills are vital.”

With the countdown to show time fast approaching, the five panto stars are all focussing on remembering their scripts, songs and dance moves, on top of busy work schedules, and all say they wouldn’t be able to do it without support from their employers, who are planning to come along and watch the stars in action this Christmas time.

Managing director at Genesis Personnel, Wendy Marr, said: “It is amazing that we have five of our team all involved in panto as well as acting and singing in general. All five of them have great, out-going personalities, which is well suited to Genesis, due to the high level of interaction between clients and candidates and also the amount of organisation and planning that’s required on a daily basis. They are all putting in incredible effort to balance time between rehearsals and work, so I’m immensely proud of them and can’t wait to see them perform in the live shows.”