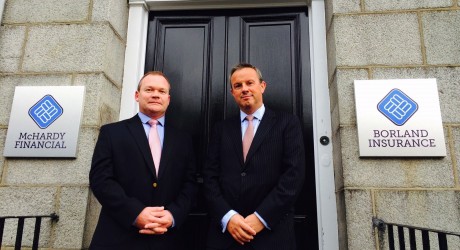 The McHardy and Borland Group, which completed two six-figure acquisitions last year including, Aberdeen-based financial advisors, McHardy and Burnett in March and Kirkcaldy based broker, the former Carlyle Insurance Group in September, has achieved significant growth since the acquisitions, increasing client and employee numbers by 20 per cent.

The group, which now has 50 employees across its three offices in Aberdeen, Dunfermline and Kirkcaldy, has recently invested and relocated into newly renovated premises in the West End of Aberdeen.

Borland Insurance has also made several key staff appointments in the last three months to strengthen its team, and the group has plans to open another Scottish office later this year, with further growth planned in 2015.

Chief executive of Borland Insurance, John Silcock: “Following the acquisitions in 2013, Borland and McHardy have worked together effectively to expand the business across Scotland. In the past year, we have continued to grow with key appointments and strategic acquisitions to expand the group’s presence in Scotland. Working as a group, we can provide our clients with greater cohesiveness and a comprehensive range of services to meet all of their financial and insurance needs. The additional offices and resources shows our commitment and cements our position as one of Scotland’s leading independent financial and insurance services providers.”

Chief executive of McHardy Financial, Ross Smith, said: “For the past year, we have been actively working to grow the McHardy and Borland group throughout Scotland. As part of the acquisitions we have recently moved to newly refurbished office in the Aberdeen city centre, further demonstrating our commitment to the North-East of Scotland. We also have future plans to open another office in Scotland, creating further employment opportunities and fundamentally enhancing our service offering to all of our clients and prospects.”

To find out more about the McHardy and Borland Group and their services, contact 01383 623300 or visit www.borlandinsurance.co.uk / www.mchb.co.uk.