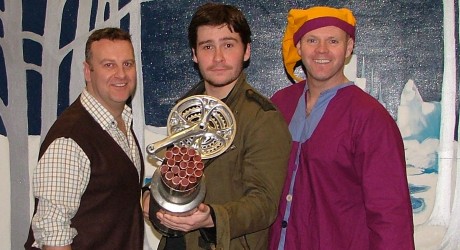 GAME of Thrones star, Daniel Portman, was every impressed by the panto staged by pupils and staff at Paisley’s Kibble Education and Care Centre…oh yes he was!

The actor who plays Podrick Payne in the cult hit TV show was guest at the panto, called The Big Freeze, performed in Kibble’s Safe Centre.

And after the show, he presented certificates to the young people who had been involved both on stage and behind the scenes.

The panto told the story of the wicked Ice Queen who keeps the Earth frozen by using a giant Ice Blaster gun and only relents by the heart-warming story of true love between the hero, Jack and Princess Wantalot.

Daniel Portman regularly helps out with drama coaching at Kibble, as his former drama teacher at the then Reid Kerr College is Gavin Sinclair, now Kibble’s Creative Arts Development Officer.

After the performance Daniel said: “The show was brilliant and like all the other performances at Kibble there was a great amount of talent and enthusiasm to be seen on stage.

“This kind of performing is also a great confidence booster for the young people at Kibble.”

Gavin Sinclair, who played the part of Gaz in the panto said: “The young people and staff who took part put in a huge amount of work to make this happen.

“The room where the panto was staged was packed and the people watching were a typical panto audience cheering and booing in all the right places.

“The reaction would have given the young people a huge boost to their self-esteem.”