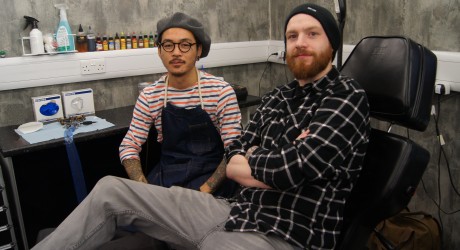 A LEADING Aberdeen tattoo studio will host a special guest artist from Japan this week as part of his year-long world tour.

Rebel Ink, which is based on the city’s George Street, will welcome Peco Matsuo to tattoo at the studio for one week until Saturday (13th December 2014).

Aberdeen will be the third UK stop for Peco, who is living a traditional nomadic lifestyle for a year travelling the world and tattooing in studios that have space available.

Speaking ahead of his visit to Aberdeen, Peco said: “Visiting Aberdeen is a very important point in my tour, because the city has deep connection with the sea and I actually grew up in the city by the sea. I also want to come and see the architecture and culture of Scotland to help me improve my art.

“My speciality is traditional Japanese style, but I also love traditional European styles with motifs with complicated details and I hope that there will be a lot of people in Aberdeen who love this style and want my work on them.”

Peco travelled to London’s Diamond Jack’s Tattoo Parlour from Landscape Rockshop in Paris last month before moving onto Nōesis Tattoo in Manchester and arriving in the Granite City this week. He will be in Scotland until 14th December before moving on to Madrid.

Rebel Ink, is one of Aberdeen’s longest running tattoo and piercing studios with four full-time tattoo artists, a dedicated body piercer and an apprentice tattoo artist.

Studio owner, Robin Cannon, said: “We are delighted to have an artist of Peco’s calibre come to Rebel Ink to tattoo for our clients. As well as our team of extremely talented tattooists, we always have space for guests to come and work and have a series of very exciting artists to be announced in the coming months.

“Often tattoo artists will use their skills to travel and spend time in different cities. Studios will offer them space to work and share their creations before they move on to the next city.

“This is great for our clients in Aberdeen because artists like Peco bring with them a particular style that perhaps our own artists are less accustomed to. They can take influence from him and he can learn from our team at the same time.”

A small number of appointments to be tattooed by Peco are still free and can be booked by contacting the studio on (01224) 622344 and walk-ins may also be available. For more information on Peco Matsuo and to see examples of his work, visit him on Facebook at www.facebook.com/peco.matsuo or on Instagram at @peco_tattooer