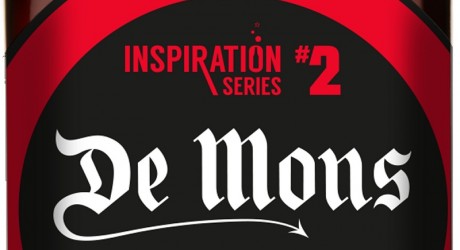 INVERALMOND Brewery, a leading independent brewer of craft beers based in Perth, has today launched the latest beer in their award-winning series of brews called ‘The Inspiration Series’, a range of beers with an international flavour for beer fans to enjoy wherever they may be.

This series of beers, which have been developed by head brewer, Ken Duncan, pay homage to brewing artisans from around the world from whom many brewers take inspiration. The Inspiration Series launched the hugely popular Czech pilsner-inspired brew, Sunburst, earlier this year and, in a professional nod to the brewers and classic beers of Belgium, are following up with #2 in the Series with De Mons.

Other beers in the series are yet to be revealed, but both Sunburst and the brand new De Mons mark a notable change in branding for Inveralmond Brewery with the use of punchy colours and dramatic designs to enhance the beers’ shelf presence. As the range grows, the brewery’s vision is for the series to appeal to classic beer lovers around the UK by creating flexible, edgy and sophisticated brews that showcase Inveralmond’s versatility as an innovative craft brewer.

Bob Hogg, the company’s commercial director, is excited to see the Inspiration Series go from strength to strength. He commented:

“After the success of Inspiration #1, Sunburst, it has proved that the passion and creativity that is being poured into this series of brews is already paying off. I am confident that we will see a surge of interest in our latest brew, De Mons, from beer lovers in the UK and possibly further afield. We are finding that we are being asked when the next in the series is launching on a daily basis! Also, the level of commitment to the product development process has allowed us to exceed our own expectations and begin to open-up these new products to new consumers.”

Ken Duncan has been an admirer of the brews pioneered by Belgian artisans for many years, visiting the country to sample their creations on more occasions than Ken can count. As a place renowned for its classic beers, they gave healthy inspiration for the creation of De Mons.

“I first brewed a Belgian beer over 20 years ago and have wanted to develop my own version ever since. There is a huge beer culture in Belgium. There are around 100 breweries there and literally thousands of beers to choose from – their range is enormous. I’ve always wanted to tap into their distinctive flavours and pay homage and show our appreciation for their world-class creations.”

As for its taste, Ken continues:

“The taste is inspired by the great beers of Belgium. Belgian beers are strong, but our new brew, De Mons, is not about strength, it is all about flavour. It is very fruity on the nose and has esters, hints of clove and a spiciness that comes from the yeast we use. The aroma is heady and the flavour is reminiscent of ripe figs and raisins. It has a golden colour and a nice warmth to the hue as well as to the palette.”

De Mons, the second brew launched from the Inspiration Series, was revealed online on Tuesday 9th December at 7.00pm in an innovative online tasting broadcast that was conducted live on YouTube and is available for review at: https://plus.google.com/events/cpvthkiobppc9ifgva4nbusachk

“We couldn’t wait to reveal De Mons to the world so launching online seemed like the best place to do it. Launching Sunburst online was a big hit so we wanted to do it again – that way everyone can be involved in this unique experience.”