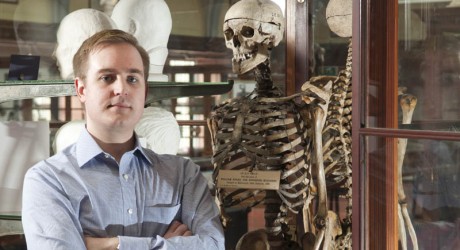 A FORMER Scotsman and Scottish Field journalist has swapped fact for fiction as he prepares to launch his debut novel on Wednesday night.

Peter Ranscombe took the story of Burke and Hare – Scotland’s most notorious murderers – and asked what happened to Hare after Burke was hanged for their crimes.

His story, Hare, which is being published in hardback and ebook on 16 December, is set in Boston during the early years of the American Civil War, when Hare falls under suspicion once more.

As part of the research for his novel, Peter, 32, delved into The Scotsman’s archive, which stretches back to 1817, to read reports of Burke’s hanging in Edinburgh in 1829.

The novel is being published by Knox Robinson, which has offices in London and New York and which specialises in historical fiction.

His book launch will take place at 6.30pm on Wednesday 17 December at Blackwell’s Bookshop on South Bridge in Edinburgh.

He spent nine years working at The Scotsman, latterly as a business correspondent. He later joined Scottish Field magazine before becoming a freelance journalist and corporate copywriter.

Peter said: “Everyone at The Scotsman newspaper was very supportive when I signed my book deal last year and it’s so exciting to see Hare in print now.

“My former colleagues at Scottish Field magazine have been a big help and support too over the past few months as the publication date has drawn closer.”

To arrange an interview with Peter Ranscombe please email him: peter@ranscombe.co.uk – more details about Hare are available at www.knoxrobinsonpublishing.com/book/hare/