Media Release: Top UK skier on road to recovery after breaking back 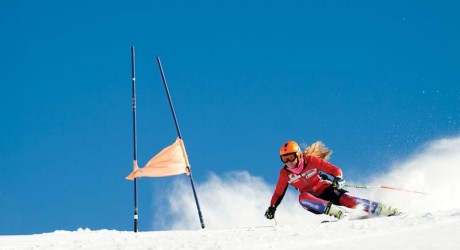 THE UK’s No.1 female alpine skier, Charlie Guest, is on the road to recovery after a potentially career-ending crash on the slopes which left her with a broken back. Originally from Perth, the 20 year-old suffered broken vertebrae after hitting a boulder while on a training session with her coach in Sweden.

Charlie’s injuries would almost certainly have been far more severe had she not been wearing a back protector which Charlie had only worn twice before the accident.

Now just three weeks later, Charlie is back on her feet and already working hard in the gym to get herself fully fit and back to competitive skiing. The vertebrae should take four-to-six weeks to heal and she is well on her way to making a full recovery.

Charlie said: “After the initial shock of the accident, it feels good to be training and I’m definitely making progress every day. I have to be patient though and I realise I need to let my body recover and build my strength up again before I even think about getting on my skis.”

Charlie is now working on her rehabilitation with a team of dedicated experts at sportscotland’s Institute of Sport in Stirling who are working very closely with her to map out her recovery journey.

“We have started working with Charlie on building her strength back up so she is currently doing some low impact strength training initially. We also need to work on Charlie’s mobility as she can’t think about skiing until she has full movement back on all sides of her body. She will get there though – Charlie is a true professional and is incredibly positive so everything is going in her favour at the moment.”

Charlie is all too aware that she is very lucky to even be walking after the accident. Had it not been for her coach, Stefan Moser, insisting she wore her back protector, her story could have been very different.

“I try not to think too much about what could have happened as it is pretty terrifying. My back protector made all the difference and I owe my coach so much for insisting I wore it. I want to encourage everyone in ski racing to wear the kit. It could be the difference between walking away from an accident, or not being so lucky.”

Aiming to get back on the slopes as soon as possible, Charlie is focussed on getting fit and back to competitive skiing as soon as February.

“At the moment I am taking one day at a time, but ideally I would love to be back competing in time for the World Championships in February. This competition would be my first senior championships which I was delighted to have qualified for. At this stage, it’s a great motivator and something to aim for.”

To find out more about Charlie and for regular updates on her progress visit www.charlieguest.com

Charlie is available for interviews upon request.