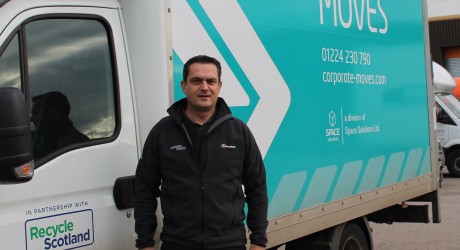 As multi-national businesses across the North-east consolidate resource and reduce office space requirements,  Aberdeen-based corporate removal company, Corporate Moves, which also has offices in Glasgow and Edinburgh, has partnered with Livingston-based Recycle Scotland to recycle or re-use office furniture and equipment.

It was estimated in 2011 that 10m items of furniture were thrown away in the UK (frn.org), with at least three million items able to be re-used. However, high costs of disposal, European waste targets and a desire to reach CSR objectives has meant that businesses today are looking to recycle or re-use redundant furniture, rather than send it to landfill.

According the Scottish Government’s Zero Waste Plan (2010), Scotland aims to recycle 70 per cent of waste by 2025. Recycling is increasing an important part of any business – new European laws due in January call for businesses and residents to separate dry goods and food waste for recycling.

Recycle Scotland and Corporate Moves have recycled 300 tonnes of desks and 200 tonnes of chairs amongst other office equipment this year (equivalent of 50 double decker buses), as companies either grow, reduce in size or relocate employees.

In conjunction with Recycle Scotland, Corporate Moves has removed unwanted furniture including desks, chairs, cupboards and IT equipment, and prepare it for recycling or re-use, to help firms avoid high disposal costs and environment damage

Andy Knight, head of Recycle Scotland, said: “Most office furniture is disposed of because it no longer meets a business’s needs, but is in perfectly good condition to be used by another organisation.

“Recycle Scotland has been working with Corporate Moves to help oil and gas companies ensure that the furniture they no longer require gets used again. It saves businesses costs and is a huge environmental saving.”

WRAP (Waste Resources Action Programme) estimated in 2011 that only 1 in 5 desks are recycled each year, but this represents a saving of 3,600 tonnes CO2e-year. According to Zero Waste Scotland, 1600 tonnes of desks are sent to landfill each year.

Stephen Levitt, head of operations, Corporate Moves, said: “Scotland’s recycling objectives point towards challenging the current thinking of make, use, dispose. Instead, we need to think about passing on items, which we no longer need, to those that will find a use for them. Desks can be fitted with new tops, chairs upholstered, cabinets repaired – very few items of used furniture need to be sent to landfill. Our clients are aware of their environmental footprint and are keen to contribute to our society, and at the same time as saving themselves money.”

Issued by Frasermedia Ltd on behalf of Corporate Moves