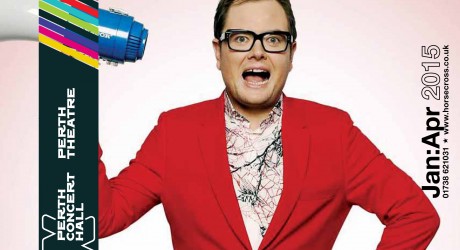 THE new Jan:Apr brochure from Horsecross Arts raises the curtain and strikes up the band on another busy season of music, drama, comedy, dance, film and join-in activities.

For classical music lovers, the Royal Conservatoire of Scotland will be performing Mozart’s The Marriage of Figaro, Perth Symphony Orchestra will delight Schubert and Sibelius fans, and there is an extensive programme of Monday Lunchtime Concerts.

Perth Piano Sundays also make a welcome return for an extended third series. The exclusive Perth Concert Series from Scotland’s national orchestras also continues for the second half of a rapturously received 2014:2015 season.

Olivier Award-winner, Lesley Mackie, reprises her performance as Edith Piaf in a unique collaboration celebrating An Evening In Paris with the Hot Club Jazz Quartet.

Regulars to the annual Southern Fried Festival will be no strangers to Perth’s own Red Pine Timber Company, who’ll be serving up their blend of soul, blues and Southern rock, with a rare appearance from Rancho Rebop and the Full Moon Howlers to boot.

The much-loved Barbara Dickson brings her tour to Perth, and The Simon and Garfunkel Story makes the transition from the West End to visit Perth Concert Hall.

With all that, and one-night concerts from Perth favourites Lau, Rick Wakeman and Steve Steinman, there’s a packed music programme to look forward to!

The show goes on while Perth Theatre is closed for restoration and redevelopment with Perth Concert Hall stepping in to present the entire drama offering in the new season, beginning with Stef Smith’s And The Beat Goes On, performed by Johnny McKnight and Julie Brown.

This co-production between Horsecross Arts and Random Accomplice will make use of the newly-constructed proscenium arch on the Perth Concert Hall stage, and under the watchful eye of Horsecross’ associate director for Drama, Kenny Miller, tells the story of sequins, survival and Sonny and Cher.

As well as introducing an intimate theatre environment and focusing the audience’s eyes on the action, the creation of the arch allows the use of fly scenery, essential to bigger theatre productions such as 2014’s rollercoaster of a traditional family pantomime Sleeping Beauty, which plays to packed houses in Perth Concert Hall until Boxing Day.

Comedy comes courtesy of everyone’s favourite Iranian comedian Omid Djalili, Alan Carr, Jimmy Carr, Dylan Moran, the controversial Stewart Lee and the sold-out Kevin Bridges. Perth Film Society presents a comprehensive series of films from around the world and there are many opportunities to learn a new skill, perfect existing talents and meet new friends in a range of Join-In activities.

Looking ahead to a special summer treat, there is a five-night run of everyone’s Secret Love, the fabulous Calamity Jane starring I’d Do Anything winner Jodie Prenger. Gun-slingin’ tomboy Calamity and her adventures in Wild West and that famous Windy City will be whip-crackin’ fun for all the family in July.

For full details on the above and much, much more in the new season, pick up a Jan:Apr 2015 brochure from Perth Concert Hall from Monday 15 December, call Horsecross Arts’ Box Office on 01738 621031 or visit www.horsecross.co.uk.