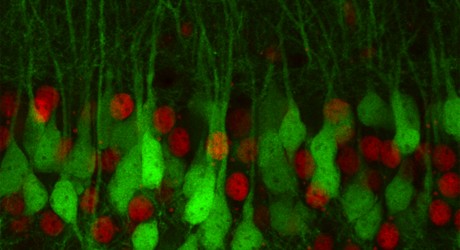 THE Scottish Society of Architect Artists (SSAA) will hold ART4X, its most ambitious exhibition to date, at The Sculpture Court, Edinburgh College of Art, from 21st to 24th January.

The exhibition features over 100 unique and accessible works of art by European architect-artists from Italy, France, Germany, Poland and Scotland. A number of invited ‘special guest artists’ will also be featured, including Kelpies sculptor, Andy Scott.

ART4X will raise funds in support of The University of Edinburgh’s renowned Patrick Wild Centre for Research into Autism, Fragile X Syndrome and Intellectual Disabilities. Visitors will also have the chance to view a series of highly unusual and colourful ‘Neuroscience Prints’ by The Patrick Wild Centre which, appropriately, bring together the seemingly disparate worlds of Science and the Visual Arts.

A charity auction will be held on the evening of 20th January, in advance of the opening of the exhibition. This will be hosted by media personality and Past President of RIBA (Royal Institute of British Architects), Maxwell Hutchinson and guest auctioneer, Gavin Strang, of Lyon & Turnbull.

At this event, the first ever winners of the SSAA Student Prize will be announced and Honorary Fellowships awarded to a number of leading individuals in the sphere of the Visual Arts.

Previews of representative art exhibits are available at: www.art4x.org.uk/gallery.

(Places at the Charity Auction are limited; those wishing to attend should contact kerry.mackay@ed.ac.uk).

ART4X is an exhibition (21st-24th JANUARY, 2015) to raise funds in support of the Patrick Wild Centre. The mission of this Centre is to understand the neurological basis of, and to test new therapies for Autism, Fragile X Syndrome, and Intellectual Disabilities by fostering collaborations between world-class basic science and clinical research at The University of Edinburgh.

ABOUT THE PATRICK WILD CENTRE

The Patrick Wild Centre is a ‘centre without walls’ that provides a stimulus and forum for multidisciplinary collaboration between more than 50 Principal Investigators from across the University of Edinburgh.

The Patrick Wild Centre for Research into Autism, Fragile X Syndrome and Intellectual Disabilities was established at the University of Edinburgh in 2010.

This collaborative approach is at the heart of all Patrick Wild Centre activities. By working together and engaging with affected individuals and their families, the Centre aims to progress the understanding of autism and intellectual disabilities and accelerate the development of new therapeutic options for people who are affected by them. The goals of the Centre are:

•To identify the genes and protein pathways that cause these disorders.
•To understand the alterations in brain cells that prevent their effective communication in people with these conditions.
•To develop and test therapeutic strategies for these disorders.
•To engage the people affected by these conditions as well as their families and those who support them to better understand their difficulties.

Scottish Society of Architect-Artists (SSAA) is an affiliated society of Royal Incorporation of Architects in Scotland, and of Ligne et Couleur, Paris. SSAA organise exhibitions throughout Scotland and regularly participate in Architect-Artist events in Paris, Verona, Stuttgart, and Warsaw.

Architect-Artists established ‘Ligne et Couleur’ in France in 1935 out of an earlier [1881] arts and crafts group who had exhibited under the more ambiguous name ‘Lovers of Nature’. In 1958 a sister society was established in Germany, and later others evolved in Poland, Italy, and Romania. In 1987, Edinburgh architect Hamish Haswell-Smith gathered together a small group of like-minded Scottish architect-artists and founded the SSAA with HRH The Duke of Gloucester as Royal Patron.

Maxwell Hutchinson was President of the Royal Institute of British Architects from 1989 to 1991. He is still a practising architect, as well as a regular radio and television broadcaster.

He has two weekly features on BBC London 94.9FM; covering London’s architecture, landmarks and ‘Lost London’, which is broadcast live from the streets and covers London’s history. Until recently, Maxwell also had a regular feature on BBC London News, ‘The Max Files’, which ran for over five years looking at areas of hidden London in detail. He is a regular contributor to BBC Radio 4’s ‘You and Yours’, ‘5 Live’, ‘Late Night Live’ and BBC2’s ‘Newsnight’.

More recently, he has been a regular contributor to various strands on LBC radio.

Amongst his credits, Maxwell has written and presented three series for Discovery TV on architecture, engineering and science (‘Prefabs and Palaces’, ‘Mod Cons’ and ‘Pure Inventions’) as well as programmes for BBC2 ‘First Sight’ covering “Glass Houses” and the “London Skyline”. Maxwell was also part of the BBC team for ‘Children In Need’ and presented live from Piccadilly Circus. He has also presented “Demolition Detectives” as well as writing and presenting a series on the social history of a Georgian House, covering a 200 year span up to and including the present day.

Maxwell’s best known buildings include Skylines on the Isle of Dogs, JS Pathology’s Headquarters at Camden Lock, Aztec Row in Islington and Pink Floyd’s recording studio in Britannia Row. For ten years he was Chairman of the Permorock Group of Building Product Manufacturing Companies, of which he was a founder. Maxwell was a visiting Professor at the University of Westminster and previously at the Universities of Nottingham and Queens Belfast. His book ‘The Prince of Wales Right or Wrong – An Architect Replies’ was a best seller (Faber & Faber).

And also twitter.com/allVisualArtsPR for visual arts-related media releases on the site!