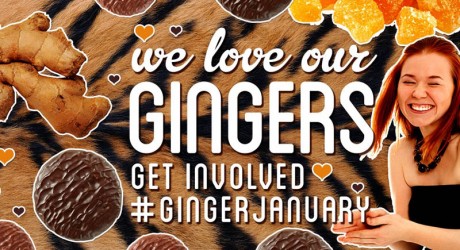 LANARK-based biscuit manufacturer Border Biscuits, has marked the start of 2015 in an unusual way by renaming January as ‘Ginger January’, to celebrate the success of its best-selling Dark Chocolate and Milk Chocolate Gingers.

The fun campaign, currently running across its social media channels, celebrates the nation’s love of all things ginger and has attracted interest on a national and international scale.

The company has been inundated with photographs of biscuit lovers celebrating Ginger January and a number of celebrities and ginger appreciation groups have been in touch to lend their support, including organisers of the annual International Kiss a Ginger Day event in London.

Every week during Ginger January, Border Biscuits has been giving away exclusive hessian bags with the slogan ‘We Love Our Gingers’ full of the ginger biscuit range and demand has been so high for the bags that the stocks have had to be replenished since the start of the year.

Brand and sales manager, Lesley Ann Gray, said: “Our ginger biscuits have always been our best seller and we wanted to celebrate and embrace the nation’s love of all things ginger with a fun campaign to start the year.

“The demand for our Dark Chocolate and Milk Chocolate Gingers is at an all-time high and last year we produced over 25 million Dark Chocolate Gingers alone to meet the nation’s love of ginger. We’ve been overwhelmed by the support for our Ginger January campaign and we’ve enjoyed receiving photographs of people celebrating the event in their own unique way.”

You can join in with Ginger January by following our hashtag #GingerJanuary on twitter @BorderBiscuits and facebook www.facebook.com/GingerJanuary

And also twitter.com/allFoodPR for food-related media releases on the site!