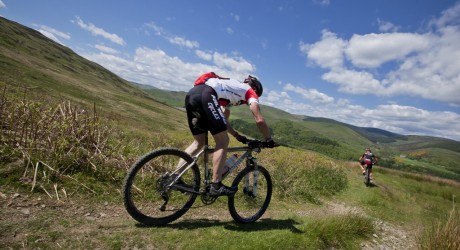 A British Cycling spokesman said: “We are delighted to be working with Durty Events once again. Selkirk has rapidly become the home of the British Mountain Bike Marathon Championships in recent years, and has established a fine reputation for the excellence of its trails and the high standard of event infrastructure.”

Award winning Selkirk based event organisers, Durty Events, who have staged the Selkirk MTB Marathon since 2013, are also pleased to announce National Events Programme funding from EventScotland, Scotland’s national events agency, to support the staging of this prestigious event.

Paul Bush OBE, chief operating officer for EventScotland, said: “Scotland is the perfect stage for mountain biking with all disciplines catered for amongst some of the world’s most spectacular scenery. The British Mountain Bike Marathon Championships will see some of the country’s top riders compete in the Scottish Borders, with amateur riders also given the chance to test themselves along the three single loop courses.”

With a choice of three single-loop and fully marked courses (approx. 25km, 50km and 75km), all setting off from Selkirk High Street, the Selkirk MTB Marathon is an epic ride through the best trails the Scottish Borders has to offer, something for families, novices, intermediates, enthusiasts and racing snakes alike. All three courses are filled with a mix of flowy natural and man made singletrack, twin-track forest roads, ancient drove roads, lung and thigh busting climbs and grin-inducing descents – ‘real’ mountain biking. Riders will visit the valleys of the Rivers Tweed, Yarrow and Ettrick with stunning views across the Scottish Borders guaranteed.

The 2015 British MTB Marathon Championships will be run as a separate ‘wave’ start shortly before the ‘sportive’ events begin. It will be raced over the single lap 75km course that also includes some of the man-made trail centre downhill tracks at Innerleithen Trail Centre. It is open to male and female riders (19+) who are British citizens and hold a full British Cycling or UCI recognised racing licence. Coveted red, white and blue British Championships winner’s jerseys will be up for grabs in both male and female classes.

Paul McGreal, of Durty Events, said: “We’re really chuffed to have been asked to organise the British Championships alongside the Selkirk Mountain Bike Marathon again. With the best trails the Scottish Borders has to offer and the most popular and challenging course in the UK we are keen to challenge riders of all abilities whilst making sure that they have the maximum amount of fun at the same time.

“The additional financial support from EventScotland will make an enormous difference to both the marathon events and our family Bike Festival in Selkirk on the first of May.”

On the evening of Friday 1 May 2015 Durty Events are taking over the centre of Selkirk and will turn it over to a free festival of two-wheeled mayhem for all the family. From 19:00 to 21:00 The Selkirk Bike Festival will be staged on the High Street with an action packed programme that includes bike stunt displays, head to head Rolalpolluza style racing, Bike film screenings, a Pump Track and a mountain bike obstacle course.

To round off the weekend in style The Selkirk MTB Marathon and The British MTB Marathon Championships will be followed up by ‘The Reivers Raid’, the fourth round of the Scottish MTB Challenge Series (mtb orienteering) on Sunday 3 May 2015 – http://www.smbo.org.uk/.

The British MTB Marathon Championships and the Selkirk MTB Marathon will take place on Saturday 1 May 2015. Entry fees (including camping) are:

Selkirk MTB Marathon – Entry on the day (subject to availability) – £40

12-15 year-olds ride for free over the 25km course but must be accompanied by a full price entry adult.

Online entry is via http://www.entrycentral.com and there are also links from www.selkirkmtbmarathon.com.

Durty Events: Durty Events are a Selkirk based events organiser responsible for award winning triathlon and duathlon events throughout Scotland including the Durty Triathlon, Craggy Island Triathlon and the famous Celtman! Extreme Triathlon.

For more information on Durty Events’ 2015 programme of events, go to: http://www.durtyevents.com/

EventScotland: EventScotland is working to make Scotland the perfect stage for events. By developing an exciting portfolio of sporting and cultural events EventScotland is helping to raise Scotland’s international profile and boost the economy by attracting more visitors. For further information about EventScotland, its funding programmes and latest event news visit www.EventScotland.org. Follow EventScotland on Twitter @EventScotNews. EventScotland is part of VisitScotland, the national tourism organisation which markets Scotland as a tourism destination across the world, gives support to the tourism industry and brings sustainable tourism growth to Scotland.