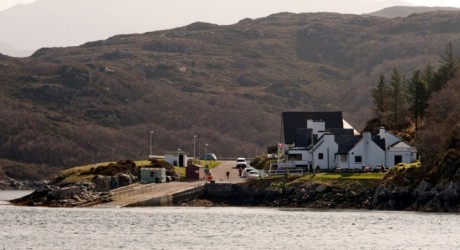 AN award-winning Highland hotel based in the centre of an UNESCO geopark is undertaking an expansion and upgrading project due for completion this spring.

The Kylesku Hotel Ltd is located on the shores of Loch Glencoul and Loch Glendhu in North West Sutherland.

Says a spokesperson: “It is based by a former ferry slipway in the centre of the North West Sutherland Geopark – one of only 35 UNESCO geoparks in the world and a designated area of outstanding geological heritage.”

The hotel was originally an old coaching inn, dating back to 1680. It is currently open during the summer months but now a new refurbishment and extension aims to grow trade and enable the owners to open longer during the year.

The project is being supported by £200,000 from economic development agency Highlands and Islands Enterprise (HIE).

Managers and owners, Tanja Lister and Sonia Virechauveix, bought the Kylesku Hotel in 2009 and with hard work and investment have managed to establish the hotel as a destination in its own right. Over a quarter of visitors in 2013 were from outside the UK and many travel to the area specifically to stay and dine at the Kylesku Hotel.

Guests use the hotel as a base for local outdoor activities including sea kayaking, boat trips, windsurfing, hill-climbing, wildlife-spotting and fishing.

Demonstrating the Tanja and Sonia’s commitment to supporting the wider community, they also own a boat tour business which is run as a partnership with a local man from Scourie.

They also exploit the rich local larder, purchasing as much food and drink as possible from suppliers within a 50-mile radius including fishermen and crofters. Fresh seafood from local fishing boats is regularly landed on the slipway outside the hotel and used in the restaurant.

The project will increase the number of rooms from eight to 11 and extend the lounge and dining room, making the most of the hotel’s prime view over the lochs and mountains. As a result, the owners expect to employ around another five permanent staff. New air source heat pumps will increase the efficiency and effectiveness of the hotel’s heating system.

Tanja said: “We are really excited about the project – for the hotel, our team and also the local community. Opening longer will be a significant boost for the area, providing both additional employment and extra tourism in the traditionally quiet winter months. We take great pride in helping to attract visitors to this fantastic corner of the country.”

The new-look hotel is on schedule to reopen for guests on March 1 2015.

Sara Campbell, development manager at HIE, said: “Tanja and Sonja have achieved significant success in their ambition to turn the Kylesku Hotel into a destination in its own right.

“The strong relationship with local suppliers, ensuring high quality, fresh ingredients has helped support other local businesses while creating an enviable reputation for dining at the Kylesku Hotel.

“This, in addition to a previous major refurbishment project which including renovating the bedrooms and dining room, has resulted in the hotel attracting repeat business from local, national and international visitors.

“Benefits for the local community have been generated through increased employment and the provision of more business for local tradesmen, fishermen, crofters and other tourism operators.

“We are delighted to be supporting the owners in the latest stage of their refurbishment of the Kylesku Hotel. This project will help create additional employment in Assynt while also attracting an increasing number of visitors to the area.”

Photograph courtesy of the Kylesku Hotel.

The Kylesku Hotel Ltd has won the following Awards in the last two years: