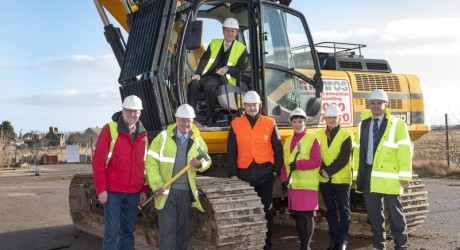 THE first phase of a masterplan to regenerate a key site in a historic Highland town is underway, with the demolition of a local landmark.

The Royal Burgh of Dornoch in Sutherland is famous for its sandy beaches, championship links golf course and 13th century cathedral. With a rich architectural heritage, the centre of the town has been designated a Conservation Area and Dornoch is a designated National Scenic Area.

Dornoch abattoir was constructed in a prominent site near the town centre in the 1970s and adapted over the years. It ceased trading in 2010 and since this time, the site has lain empty and the condition of the buildings has deteriorated.

Now, the former abattoir, renamed as the Dornoch South development site, is to be demolished in the first phase of a regeneration project.

In consultation with the local community development group, the Dornoch Area Community Interest Company (DACIC), owners ANM Group, Highland Council and Highlands and Islands Enterprise, a masterplan has been developed in order to identify and promote suitable future uses for the site.

As supported by a grant of £125,000 from The Highland Council’s Vacant and Derelict Land Fund, earlier this week, the first stage of this rolled into action as construction workers began the process of demolishing the abattoir buildings. Following the demolition, decontamination work will commence and eventually the site will be put to a mixed use, possibly including residential, retail and community spaces.

Jenifer Cameron, chair, Dornoch Area Community Interest Company, said: “There will be delight and relief in Dornoch that redevelopment of this important site is underway. It creates an important opportunity for our town to have new and exciting initiatives so close to the town centre.”

Pete Guthrie, head of Strengthening Communities from HIE, said: “It is a landmark moment for the local community that the first stage of the regeneration of this site is beginning with the demolition of the existing buildings. The masterplan outlines some exciting opportunities which will add to the vibrancy of the town.”

Councillor Thomas Prag, chair of the Council’s Planning, Development and Infrastructure Committee, said: “I’m delighted that a grant of £125,000 from our Vacant Derelict Land Fund will be used to breathe life back into this prime site and unlock the potential for economic growth and job creation. Not only will this project bring increased prosperity to Dornoch but it fits in well with our commitment to create sustainable communities by using the Fund to bring long term vacant and derelict sites back into productive use.”

Grant Rogerson, executive director at ANM Group, said: “Much as we would have preferred not to close the abattoir in 2010 the difficult decision was taken following some of the most challenging trading conditions we’ve ever experienced. The ANM Group Board were however determined to regenerate the site and look at ways of developing the area which lies in the heart of the town. We are very grateful for the invaluable help and support received from HIE, The Highland Council and the Dornoch Focus Group without which it would not have been possible for us to get to this stage in the project.”