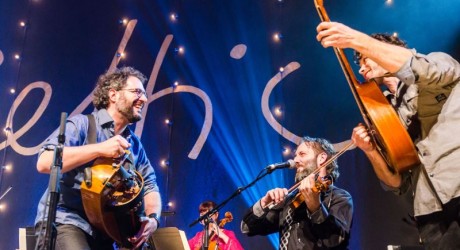 THE cream of Celtic Connections 2015 concerts will come to our screens in the coming weeks as BBC ALBA presents a new series of Cuirm@Celtic.

The series gets underway on January 31 with a concert set from Quebecois band Le Vent Du Nord. The quartet always receive a rapturous welcome when they take to the stage in Scotland and this reception is only heightened in this special Misses et Messieurs evening where the band is joined by a host of female talent, including Emily Smith and Sharon Shannon.

Cuirm@Celtic continues on February 7 with an evening with Mairi Smith and friends. The Lewis-born singer’s profound understanding of the Gaelic tradition has made her one of Scotland’s most revered artists in any language and the concert features two of the younger Scottish singers that Smith continues to inspire, widely acclaimed star Julie Fowlis and former Dàimh vocalist Calum Alex MacMillan.

The third and final programme of the series, Cuirm@Celtic – Caidreabh is Ceol, will be screened on February 14 and features an eclectic range of talent performing at the Horizons concert at the festival. Covering all corners of the UK and Eire, performing artists will include Kate Rusby, Al Lewis, Declan O’Rourke, Karine Polwart, Macanta, Nell Ní Chróinín and Damien O’Kane. The Horizons concert was supported by the British Council and Cuirm@Celtic: Caidreabh is Ceol is co-financed by MG ALBA, TG4 and S4C.

Margaret Cameron, channel editor BBC ALBA, said: “It’s always a challenge to choose acts from the vast array on offer at Celtic Connections but this year we are offering a superb range of talent, from well known performers to up-and-coming stars, we’ll provide a showcase for Gaelic, Celtic and World artists.

“Cuirm@Celtic has been a hugely popular series on BBC ALBA over the past few years and we are certain that this year will be no exception.”

The new series of Cuirm@Celtic complements BBC ALBA’s coverage of BBC Radio Scotland’s Young Traditional Musician of the Year Final, which will be shown on the channel on Monday 2 February at 9.00pm.

Bees Nees Media has also been recording sessions from the festival at Cottiers Theatre in Glasgow’s West End for a new BBC ALBA series called Seirm, which will draw on the rich pool of talent appearing across Celtic Connections and creating opportunities for amazing and sometimes unexpected musical collaborations.

Lahore Ceol Mor, featuring Gaelic Singer of the Year Mischa MacPherson, Irish supergroup Danu, Canadian five-piece Fish & Bird, Cahalen Morrison & Eli West and Adam Cohen represent just a small sample of the talent to be featured. Mary Ann Kennedy will again host this new series of programmes, which are co-financed by TG4 and will be transmitted in autumn 2015.

Cuirm@Celtic is produced by Bees Nees Media for BBC ALBA with the first programme in the three part series being broadcast on Saturday 31 January at 9.00pm and subsequent programmes following each Saturday thereafter.