Media Release: Inside Out of Mind – transforming dementia care through theatre 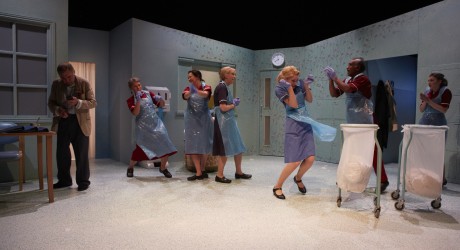 MEETING Ground Theatre Company and Nottingham Lakeside Arts will tour Inside Out of Mind, an insightful and darkly comic play that powerfully captures the multiple realities of life on a dementia ward, to six venues across England from Wednesday 18 February to Friday 27 March 2015.

The tour follows the success of a limited run in 2013 that resulted in an Arts Council England Strategic Touring Grant.

Inside Out of Mind is based on and inspired by the extensive observational research material compiled from an academic study into healthcare wards of NHS Hospitals treating patients with dementia by social scientists at the University of Nottingham’s Institute of Mental Health.

Welcome to the ward with no name… A theatre of magical, medical realism. A fusion of love stories, crisscrossing time and space, where walls turn into forests; thunder to gunfire; books to birds; with untold stories kept under their wings. Nurses come, nurses go – carrying, folding, and keeping the continuum of person-centred care and its fragile emotional legacy in tact.

Inside Out of Mind is a multi-layered illustration of life within dementia care from the perspective of patients, carers and visitors. It offers glimpses into a mysterious world, touching on some of the profound themes associated with dementia including time, identity, loss, relationships, power and death.

Writer and director, Tanya Myers (co-artistic director of Meeting Ground Theatre Company) not only echoes the research observations in the play’s characters and scenes but she also uses the medium of theatre, with all its scope for illusion and magic, to engage the audience’s emotions, fostering empathy for staff and patients, while giving pause for reflection and intuitive listening.

Adds the spokesperson: “Inside Out of Mind is an inspiring and collaborative theatre project that took three years to evolve, bringing together Meeting Ground Theatre Company, Nottingham Lakeside Arts, The University of Nottingham and the NHS to tackle the challenge of dementia care.

“A number of local health care trusts see Inside Out of Mind as an innovative and engaging way to raise the skills and awareness of their basic-grade staff, health care assistants, who figure importantly in the play. At each venue on tour, there will be dedicated NHS staff performances and post show discussions, with tickets being sponsored by the trusts.”

Inside Out of Mind has been designed by Nettie Scriven; with lighting design by Richard Statham, digital media design by Barret Hodgson and original music and sound design by David Wilson.

Meeting Ground Theatre Company is collaborating with award-winning film makers, we are caravan – to create a filmed version of the play. The plan is to distribute the film to cinemas, care homes and hospitals across the UK to ensure as wide a viewing as possible of this remarkable piece of work.

For more information on the 2015 tour of Inside Out of Mind and Meeting Ground Theatre Company, go to http://www.meetinggroundtheatrecompany.co.uk/

For more information on Nottingham Lakeside Arts, go to http://www.lakesidearts.org.uk/

Director, Tanya Myers, introduces ‘Inside Out of Mind': https://www.youtube.com/watch?v=yY4WTdqOR6U

Inside Out of Mind – raising awareness of dementia care through theatre: https://www.youtube.com/watch?v=Kbir0cCQPYM

Inside Out of Mind – a brief history

In 2011, Professor Justine Schneider and colleagues at the Institute of Mental Health, University of Nottingham, published the results of a study of dementia wards, based on 600,000 words of observational field notes. From this material, Tanya Myers was commissioned to write a play with the aim of impacting positively on the care of people with dementia whilst highlighting the skills and compassion of the caring professionals working with dementia patients.

The first run of Inside Out of Mind took place at Lakeside Arts Centre, Nottingham, from June 14-29, 2013. Many of the tickets were financed by local Health Trusts, who saw the play as an innovative and engaging way to raise the skills and awareness of their basic-grade staff, health care assistants, who figure importantly in the play. Care home staff and home care workers were also encouraged to attend.