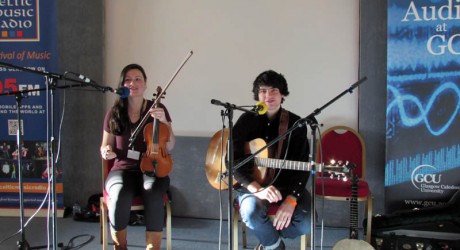 CELTIC Music Radio 95FM, the charitable community radio station based in Glasgow, has broken its audience record for this year’s Celtic Connections.

More than 115,976 people tuned in either on 95FM across Glasgow or via its website as the station broadcast live for the 10th year running at Connections, which ended yesterday (Sunday, Feb 1).

Its 30-strong team of volunteers, with technical support from Glasgow Caledonian University Audio Technology students, broadcast live for 116 hours and this included live sets from 80 musicians and groups from Scotland, other parts of the UK and overseas.

“We wanted to be at the heart of Celtic Connections and these audience figures, our highest ever, show that we have,” said Celtic Music Radio chairperson, Alex Jenkins.

“On average we have 72,000 listeners a month in the Glasgow area and in 175 countries worldwide online – so the increase for January has been remarkable and hugely gratifying.

“This was our tenth year of supporting Celtic Connections and we are both pleased and humbled that so many people appreciated our programmes, which we offered eight hours a day during the festival.

“We would like to thank everyone who tuned in, the musicians who played live sessions and the GCU students for making them sound great. With our hardy band of volunteers of presenters as well, it has been a tremendous team effort.”

Celtic Music Radio 95FM is the only Ofcom-licenced radio station with a mission to support and promote Scottish music and culture – and it offers a festival of music, 24 hours a day, 365 days a year.