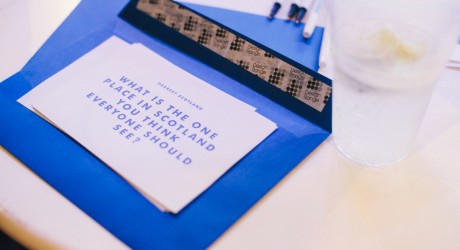 DEAREST Scotland, an award-winning apolitical initiative working to collect letters to the future of Scotland, today launches a Kickstarter campaign to raise funds for the publishing of a book format of the project’s submissions.

Since March 2014, the team behind the initiative has focused on reaching people across Scotland, the UK and abroad offering a platform for Scots and non-Scots with a connection to the country to write a letter to its future.

The Kickstarter campaign aims to raise £10,000 to cover the cost of a publication which will see the accumulation of all the letters the project has both received and continues to receive until 31st March 2015.

On the success of the campaign, via reward-based donations contributors will receive an array of limited Dearest Scotland merchandise, benefits and collaboration opportunities in return for their support. All profits from the sales of the books over and above production and shipping costs will be donated to new and existing Scottish literacy projects.

Dearest Scotland project manager, Cat Cochrane, said: “We’re delighted to be a step closer to our ambition of publishing a book format of letters which have been written to the future of Scotland.

“We commenced the initiative in March of last year and have spent time spreading the word about the opportunity for people to write their visions, hopes, dreams and fears for our nation.

“The idea is simple but very worthy. It’s a spin on writing a letter to your 14 year-old self. Dearest Scotland offers the chance to write about what we’d like Scotland to be like in years to come.”

With the project open to all ages, backgrounds and connections to Scotland, letters have been received from across the country and can be viewed on the Dearest Scotland digital catalogue.

With the Kickstarter campaign live for the next 30 days, further letter submissions are welcomed both digitally and in handwritten form, guaranteeing a place in the book publication if received before the deadline.

Cat adds: “Many of us believe we have it in us to write a book one day. While that might be a bit too ambitious for most, a letter to the future of Scotland is definitely feasible.

“It can contain anything at all in connection with the country. How our education system might evolve or what a Scottish high street in 25 years might look like perhaps. We all have something to say and Dearest Scotland offers the chance to get it down on paper allowing it be shared.”

The team will continue to collect letters following the prospective book publication until September 2015, when they aim to culminate the initiative with an exhibition of letters in the Scottish Parliament building.

Also welcomed are ambassadors for the project who can take Dearest Scotland into their communities to run letter writing sessions and workshops in celebration of creative citizen participation and open democracy at grassroots level.

Taking the project forward in 2015, Cat explains: “We’d love to receive at the very least one letter from every Scottish village, town and city. Inclusive to everyone, our aim is to harness as many visions both geographically and demographically as possible.

“The ultimate goal is to see Dearest Scotland utilised in schools up and down the country. Penning a letter to the future of your country is a cathartic experience at any age, and the visions written by young people can teach us so much about the here and now and the future.”

For more on the project and to view a selection of letters, click here.

We Are Snook · Books · Scotland-wide