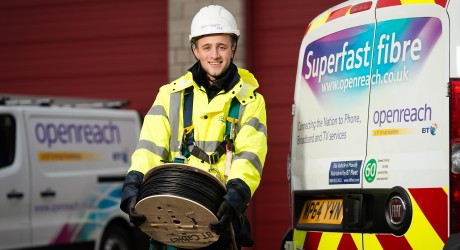 The 1.5 million includes homes and business premises from Gretna in Dumfries and Galloway to Lerwick on Shetland via more than 173,000 premises in Glasgow, 152,000 in Edinburgh, 98,000 in Aberdeen, 56,000 in Dundee and 26,000 in Inverness, with almost 1.3 million premises passed by BT’s commercial rollout and more than 220,000 included in the Digital Scotland project to date.

The Scottish Government’s Deputy First Minister, John Swinney, said: “The fact that over 1.5 million people now have access to fibre broadband is another positive piece of news. The scale of delivering fibre broadband across our communities in Scotland shouldn’t be underestimated and this announcement shows how hard engineers are working.

“We are still in the early stages of the Digital Scotland Superfast Broadband programme, and, without it, thousands of Scottish homes and businesses simply wouldn’t have had access to high-speed technology.

“It’s a fundamental part of the Scottish Government’s aim to deliver world class connectivity by 2020, enabling people across Scotland to connect any time, any place, anywhere using any device.”

UK Government Digital Economy Minister, Ed Vaizey, said: “This is tremendous news for Scotland, and I’m delighted that 1.5 million homes and businesses have now got access to a fast and reliable internet connection. The UK Government is investing £100 million in superfast broadband for Scotland and our rollout has already reached more than 200,000 properties that the commercial rollout would not have covered.”

Brendan Dick, BT Scotland director, said: “BT has been a driving force in transforming Scotland’s broadband landscape, passing another 10,000 households with the technology every week last year. We’ve recruited hundreds of extra engineers and invested hundreds of millions of pounds through our own commercial fibre broadband programme and the Digital Scotland partnership.

“Today is a major milestone in Scotland’s digital revolution. Access to secure, high-speed communications will drive the future economic prosperity of our country. It’s vital that people embrace the digital revolution and make the most of the new infrastructure. Together with our partners, we will continue to work to meet Scotland’s ambition of delivering world class connectivity by 2020.”

The Digital Scotland Superfast Broadband programme aims to provide fibre broadband infrastructure to parts of Scotland not included in commercial providers’ investment plans. It consists of two projects – one is led by Highlands and Islands Enterprise (HIE) for its region and the other covers the rest of Scotland.

Enquiries about this news release should be made to the BT Scotland press office on 0800 085 0660. All news releases can be accessed at our web site: http://www.btplc.com/News

BT is one of the world’s leading providers of communications services and solutions, serving customers in more than 170 countries. Its principal activities include the provision of networked IT services globally; local, national and international telecommunications services to its customers for use at home, at work and on the move; broadband, TV and internet products and services; and converged fixed/mobile products and services. BT consists principally of five lines of business: BT Global Services, BT Business, BT Consumer, BT Wholesale and Openreach.

British Telecommunications plc (BT) is a wholly-owned subsidiary of BT Group plc and encompasses virtually all businesses and assets of the BT Group. BT Group plc is listed on stock exchanges in London and New York.