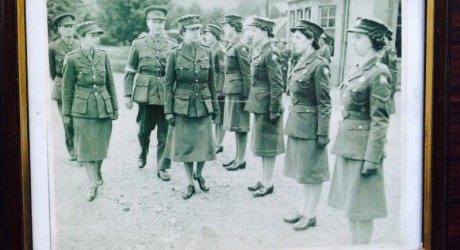 THE new owners of Tinto House Hotel are appealing to the local public to see if they can help solve a Royal mystery that dates back to the Second World War – following the discovery of a photograph, originally thought to be The Queen, visiting the Lanarkshire hotel in 1942.

The hotel, which this year is celebrating its centenary, came under new management last year and the photograph was found in the office area of the hotel. The new team have been unable to find any record of The Queen’s visit and, keen to uncover the story behind the mysterious photo, the hotel wrote to Buckingham Palace to see if Her Majesty could shed any light.

Says a spokesperson: “Receiving an eagerly-awaited reply, The Queen’s Lady In Waiting, Lady Susan Hussey, responded, explaining that the person in the photo was not Her Majesty, Queen Elizabeth II, but was the Queen’s late aunt, Princess Mary, who bears an uncanny resemble to the Queen.

“Yet, despite being able to identify that the Royal visitor in the photo was Mary, The Princess Royal, Buckingham Palace regretted it had no record of her visit to Tinto House Hotel.”

The team at Tinto House Hotel are now eager to find out more about Princess Mary’s visit to the hotel all those years and are appealing to the public to see if this photo brings back any wartime memories of the Royal visit to the area.

“Being 100 years-old, Tinto House Hotel is bound to have had some high-profile guests in its time, but we are particularly keen to find out more about this Royal visitor, or any others that may have stayed here over the years.

“All we have is this photograph from around 1942 as evidence of Princess Mary’s visit and we’d be delighted to find out more about her time at Tinto House Hotel. We hope this appeal might lead to some memories being reignited, so we can celebrate the whole story.”

If anyone has any further information about the hotel’s Royal guest please contact Elaine McFarlane at Tinto House on sales@tintohouse.com