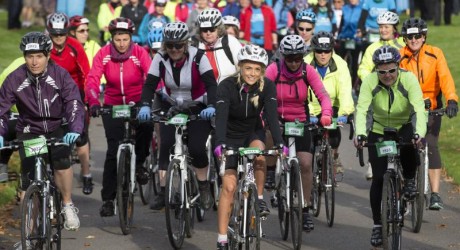 IN response to market demand, Macmillan Cycletta, the leading women-only sportive series, has today announced they are extending their series distances at five of their events to include the 20km distance.

The shorter distance will offer participating ladies an alternative to the longer distance routes preferred by more experienced cyclists and is ideal for beginners looking to take up cycling, or participating in their first major cycling event.

Earlier this year, Macmillan Cycletta announced it was also adding new long distance routes of 150km so several of the events, in response to feedback from participants that they were looking for greater physical challenges.

“We’re very much listening to what our participants are looking for from an event and ensuring their needs are met. We’re delighted to include the 20k distance in the Macmillan Cycletta Series and look forward to getting many more women involved in the event series this year.”

“It is such a rewarding experience taking part in an event like Macmillan Cycletta Scotland and raising vital funds for charity in the process. Many participants raise funds for Macmillan Cancer Support and we believe the 20k distance will very much appeal to a wide spectrum of fundraisers of all abilities, as well as those ladies who may be entirely new to cycling as a sport.”

The 20km route has been added to five Macmillan Cycletta events nationwide throughout 2015, including at Scone Palace, Perth on Sunday 19th July where women can now enter 20k, 50k, 100k or 150k distances.

Cycletta was launched three years ago and so far over 10,000 women have taken part in an event across the UK.

Entries are now open for the Macmillan Cycletta in Scotland at www.humanrace.co.uk/cycletta

Macmillan Cycletta is the UK’s leading series of women-only cycling events, designed for committed cyclists as well as those new to sportives. Cyclists can secure their place at these events by signing up at http://humanrace.co.uk/cycletta/.