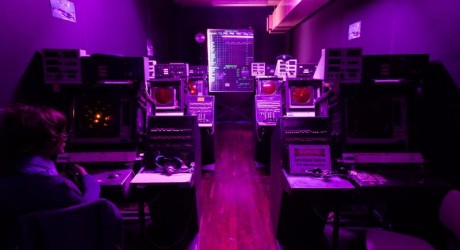 It was while on a visit to the Fife-based bunker in 2011, with his family, that British author, Paul Teague, found the inspiration for his Secret Bunker book trilogy.

Since that creative spark at the bunker in 2011, Paul has written three books in his Secret Bunker series: Darkness Falls, The Four Quadrants and Regeneration.

Says a spokesperson: “The dystopian fiction books tell the story of a family who, while on a visit to a dis-used Secret Bunker, get caught up in the life-threatening events caused by a nuclear threat to the planet.”

The Secret Bunker team are delighted that the centre has inspired a book series. James Mitchell, managing director of Scotland’s Secret Bunker, commented:

“The bunker is a very atmospheric place to be and is inspiring for anyone who has a creative imagination. Just over 30 years ago, we were literally on the brink of a nuclear war and, when people visit, they are amazed at just how recent the threat was and how prepared we were to protect ourselves from that threat. There is a real feeling of ‘what if’ and Paul’s books have captured that.”

Scotland’s Secret Bunker is re-opening its doors to the public this weekend, after being closed for the winter months. The atmospheric, Cold War museum, hidden beneath a farmhouse near St Andrews, is gearing up for an extra special season as it celebrates its 21st birthday as a visitor attraction.

Adds the spokesperson: “Opened to the public in 1994, after being decommissioned in the late 1980s following the collapse of the Soviet Union and the dissolution of nuclear threat, the bunker is now one of Fife’s major tourist attractions welcoming tens of thousands of visitors through its blast doors every year.”

With Scotland’s Secret Bunker re-opening this weekend, there’s lots to look forward to in 2015.

“After some extensive refurbishments in 2014, we are looking forward to welcoming more visitors this summer to experience our Cold War museum. We have been open to the public as a visitor attraction for 21 years this year and the Secret Bunker is more interactive than ever before, with information screens that bring the bunker to life, an audio tour and previously-unseen areas. There is so much to see and absorb.”

To order a copy of the books from the Secret Bunker trilogy online, visit http://www.secretbunker.co.uk/shop/products?CatID=1