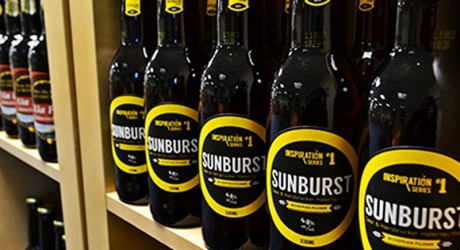 INVERALMOND Brewery in Perth is taking its beer to Sheffield in March, to compete against brews from across the country at the BeerX National Beer Competition 2015 organised by the Society of Independent Brewers (SIBA).

The brewery’s Sunburst Pilsner from their Inspiration Series, a range of beers celebrating fellow brewing artisans from around the world, earned its place at the national finals by winning an award in a regional SIBA competition.

It is one of just a handful of beers to represent Scotland at BeerX, where it will be judged against beers of the same style from all over the country.

Gold, Silver and Bronze medals are awarded in each category, as well as three Supreme Champion Awards, given to the best cask, keg and bottled beers.

Winners will be announced on Wednesday 18 March.

After being judged by a panel of more than 100 judges, all the beers will be sold to drinkers at the BeerX Festival of Beer.

Beer enthusiasts and novices are expected to visit the festival and enjoy some of the 200+ ales, lagers, stouts, milds and other styles of beer on offer.

Fergus Clark, managing director of Inveralmond Brewery, says: “We are very proud of our beers and delighted to have this opportunity to compete on a national stage, against some of the finest beers from all over the UK.

“Obviously, we’re hoping to come home from BeerX with a medal, but we’re happy just to be going to Sheffield and introducing our beer to hundreds of drinkers who haven’t tried it before.”

He added: “We’re grateful to everyone at our brewery who has helped us to brew great beer, and to the many local pubs, shops and drinkers who have supported us.”

Fergus described Sunburst, a 4.8% ABV pilsner, as “a warm and golden pilsner and the only Czech pilsner that is actually brewed in Scotland”.

He continued: “Crisp and satisfying, Sunburst is a combination of soft Perthshire water, aromatic Saaz and Hallertau Hersbrucker hops and yeast sourced from an ancient brewing site in Prague. We have been developing this beer since the late nineties and are very proud of its continental taste and continued success.”

SIBA managing director, Mike Benner, said: “There are now more than 1,400 small brewers in the UK, producing innovative, flavourful beers that have fuelled the regeneration of the British beer market and introduced millions of consumers to our national drink.

“With hundreds of beers entered into at our regional beer competitions, winning an award and progressing to the national finals is a mark of a quality beer and Inveralmond Brewery should be very proud of their achievement.”

BeerX is an annual celebration of British beer, organised by the Society of Independent Brewers. This year, it takes place at iceSheffield from 18-21 March. The event includes: speeches from some of the beer industry’s leading figures; seminars on a variety of beer-related topics, delivered by experts in their field and the announcement of the National Beer Competition and SIBA Business Awards winners. On 20-21 March, SIBA stages the BeerX Festival of Beer, showcasing more than 300 beers, all of them finalists in SIBA’s National Beer Competition. It is the biggest beer festival to offer drinkers a choice of cask, keg and bottled beers from across the country.
www.siba.co.uk
www.beerx.org

Opened on 14th May 1997, The Inveralmond Brewery is an expert craft brewer of a range of beers including Lia Fail, Ossian and Thrappledouser. Situated at the very heart of Scotland, in Perth, the brewery nestles between the fabulous rolling hills of Perthshire, the mighty Grampian mountain range and is surrounded by crystal clear rivers, providing inspiration and nourishment for the beers it produces and exports around the globe.

Recent accolades for Inveralmond Brewery include winning the award for Excellence in Food and Drink Produce Award at Perthshire Chamber of Commerce Business Star Awards 2014.
Stockists of Sunburst Inspiration Series #1: