Media Release: Swapping the beat for the Business Improvement District 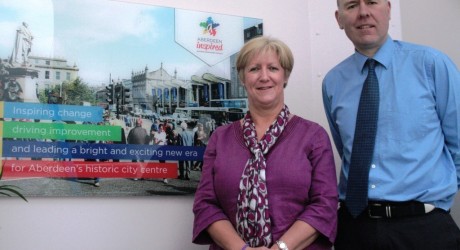 THE views of Aberdeen’s Business Improvement District (BID) are being sought as the organisation responsible for the city centre initiative gears up for its most important year yet.

Business organisation Aberdeen Inspired has appointed two new BID liaison officers as it begins preparations in advance of its renewal ballot which is set to take place early in 2016.

The latest recruits, Andrew Verreydt, 49, and Marie Rennie 49 have both amassed over 30 years of service with Grampian Police, and latterly Police Scotland, in a variety of roles and areas.

But both will now turn their attentions from the beat to the Business Improvement District as they look to engage with levy payers within the BID area, providing a vital link between the two in an effort to gain feedback that will be used to shape current and future projects.

Liaising with a variety of sectors, including retail, licensed trade and business sectors, the pair will continue to place an emphasis on successful partnership working in a concentrated effort to make the city centre more welcoming and attractive for residents, businesses and visitors alike.

“Andrew and Marie will both be out and about, meeting with our wide variety of levy payers and other businesses in the zone in order to really give them a voice and to take on their views and opinions in advance of our renewal ballot in 2016. The foundation of a successful BID is really built on engagement with our members and the business community. I’m confident their voices will continue to be heard in the months ahead.”

Andrew, who also worked in various partnership development roles during his time in the force, will combine his BID liaison work with a development co-ordinator position. A specialist in strategic partnerships, his previous work saw him involved with a number of key, award-winning city centre orientated projects.

Marie previously worked in a variety of uniform and CID roles within Grampian Police and Police Scotland and also completed secondments to the United Nations International Police Task Force in Bosnia and Herzegovina and Interpol, London.

Andrew said: “I’m very excited to be joining Aberdeen Inspired at what is an important time for the organisation as it moves towards the renewal ballot in 2016. It will be gratifying to play a part in continuing to shape the city centre in an effort to make it safer, more welcoming and more attractive for those who use it on a regular basis.

“I’m really looking forward to putting into practice the partnership working skills that I accrued in my previous roles and to see tangible results emerging in the wake.”

Marie added: “After a ten-month career break, I’m looking forward to getting out and about in the city centre of Aberdeen, engaging with a wide spectrum of people within the BID area. The views of our BID members are critical to our success and it will be our role to allow this two-way communication to happen.”

Aberdeen Inspired is the banner under which the Aberdeen BID (Business Improvement District) operates. It is a business-led initiative within the city centre in which levy payers within the BID zone contribute. Proceeds are used to fund projects designed to improve the business district.

Further information on the work of Aberdeen Inspired is available at www.aberdeeninspired.com.