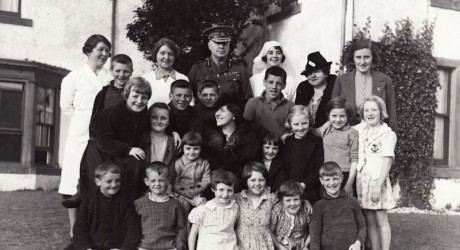 LYING nestled and out of sight for nearly 70 years, a letter written by a little boy to his friend during World War Two has been discovered at Blair Castle during their winter conservation works.

The short letter, which has been in hiding since 1945 behind a radiator in the castle’s grand ballroom, is believed to be correspondence between two young evacuees who had been sent to the safety of the countryside until the end of the war.

Now the team at Blair Castle are appealing to the public to see if they can track down the two young friends, who may now be in their 80s, to reunite them with the lost note sent all those years ago in 1945 as well as a collection of keepsakes including dominos, cigarette cards and an unusual golf game involving a dice.

The almost perfectly preserved letter, featuring the unmistakably innocent scribblings of a young child, was written by Archie who was writing to his friend, or possibly a relative, called Bill who was staying at Blair Castle. The letter begins by asking after Bill, then comments on how quiet it is without him and goes on to tell him of another friend, Jackie who is “going away for good”.

The heading on the letter indicates Archie was staying at Boturich Castle in Balloch, Dunbartonshire and, going by the location of the letter, Bill was a resident at Blair Castle. The castle team are keen to hear from any members of the public that may be able to shed some light on Archie and Bill to piece the story together.

“It is incredible to think that Archie’s letter to Bill has been lying hidden for such a long, long time in one of the castle’s 30 rooms and it would be fascinating to hear more about their story and their memories of being evacuated during the war. Who were Bill and Archie? Where were they from? Do they even still know each other? Are they both still alive? It must have been a frightening time for them during the war, but we hope Bill enjoyed his time exploring Blair Castle and the surrounding area during his stay.”

“If this letter sparks a memory for anyone, we would love to hear from them. Blair Castle is steeped in over 700 years of history and this remarkable little find is another story to add to a chapter in the castle’s long and rich history.”

The castle’s archive team also found a photograph of the 8th Duke of Atholl with the evacuees who stayed in the area during World War Two. Is Bill in this picture from 70 years ago?

If you know who Archie or Bill are then please contact Blair Castle on 01796 481411 or email office@blair-castle.co.uk

Blair Castle, one of Scotland’s most popular tourist destinations, will officially open to the public for the summer season on April 1st 2015 with tours of the grounds available as well as a restaurant and gift shop for visitors to enjoy. The castle are also offering special season passes for £12 that allow people to visit the castle and gardens as many times as they like during the season.

Blair Castle is introducing four exhibitions for visitors to experience throughout 2015. One is to celebrate Scotland’s Year of Food & Drink, displaying castle memorabilia including recipe books featuring authentic recipes prepared for the Atholl family over a hundred years ago.

Three further exhibitions are to commemorate the centenaries of three Battles in history. A Gallipoli exhibition to mark 100 years since the Dardanelles Campaign in the First World War, a Battle of Waterloo exhibition as it is 200 years since that famous conflict and also, to mark its 300th anniversary, an exhibition remembering the 1715 Jacobite Rising.

To find out more about visiting Blair Castle, go to www.blair-castle.co.uk

Image at Blair Castle features the 8th Duke of Atholl with children evacuated to the area during WW2.