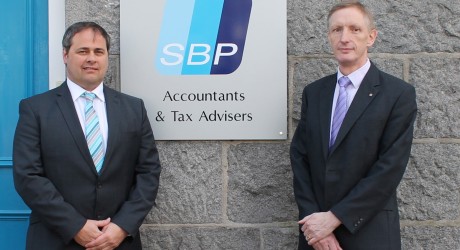 A LEADING North-east accountancy business and advisory firm has strengthened its services following the acquisition of an Aberdeen based accountancy practice.

SBP Accountants and Business Advisors, which has offices in Aberdeen, Peterhead, Fraserburgh and Banff, has merged forces with Andrew Philip Chartered Accountants, based in Aberdeen’s Carden Place.

Andrew Philip was founded by Andrew A B Philip in 1962, who operated as a sole trader until the mid 1970s, when partners Bill Wallace and George Morrison joined.

Mr Philip retired in 1990, followed by Mr Wallace in 2009, leaving Mr Morrison as the sole owner.

As part of the deal, the chartered accountant’s client list moves over to SBP tripling the company’s Aberdeen customer base, which includes a number of high-profile North-east based businesses, including a number of oil and gas clients.

To accommodate the growth of the company, SBP’s Aberdeen office will relocate to Carden Place, and Mr Morrison will join SBP in a consultancy role with his ten members of staff, resulting in SBP’s six partner practice increasing employee numbers to 37.

Managing director of SBP, John Hannah, said: “The firm of Andrew Philip is a long-established and respected accountancy practice. Ironically, it is where SBP’s founder, George Shearer, trained to become an accountant.

“This is a significant milestone for the company and the acquisition gives us a superb platform to continue the growth of our Aberdeen office.”

Mr Morrison added: “I am delighted to be joining forces with SBP, which is a well established name across the North-east. I look forward to working with John and his team to build on our experience and grow our presence in Aberdeen, while continuing to offer clients a first class service.”

SBP offers a variety of business and accountancy services, including personal and business taxation, as well as a dedicated business services department to cover everything including bookkeeping, VAT and payroll requirements.

Andrew Philip’s practice has been in operation for more than 50 years, and has been active in providing a large number of clients with accounts, tax, bookkeeping, payroll and VAT work.