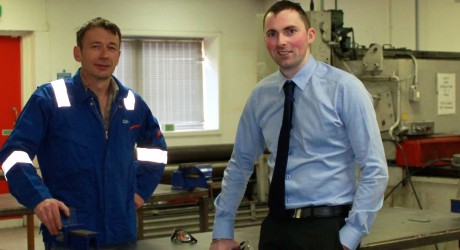 A PETERHEAD businessman who climbed the career ladder to launch his own company, has gone full circle by using the services of the North-east apprenticeship training firm which taught him.

Richard Forman, joined Dyce-based ITCA Training as an apprentice pipefitter after leaving school, and his experience of the top quality learning environment has seen him to employing his own apprentices at his firm, Onsite Services.

ITCA, which was established in 1989, is one of the largest apprenticeship-training firms in Scotland, and provides training for young employees in sectors including welding, fabrication, mechanical engineering, business administration and logistics.

Mr Forman’s time as an apprentice pipefitter included a mixture of hands-on and classroom-based learning covering a variety of courses, which he completed during his four-year apprenticeship at S & D Fabricators in East Tullos, Aberdeen.

Following his apprenticeship, he joined CPS in Dyce travelling around the globe to work in a number of locations including Singapore, Holland, Angola and Canada.

In 2010, the young entrepreneur made the decision to use his experience to start his own business, and he established Onsite Services, supplying skilled trades and labour hire to oil and gas companies in and around Aberdeen.

By 2012, Mr Forman had two employees and opened his first workshop in Peterhead. With help from A & B Welding, and its co-founder Frank Birse, Onsite received its first project, and as the company started to grow, so too did its workforce and by mid 2013 he had 12 members of staff.

Last year was extremely busy for Onsite Services, which has offices in Aberdeen and Peterhead, and the company opened its fabrication facility in Peterhead, which boasts a carbon workshop and a separate workshop for dealing with exotic materials.

Today, the company’s workforce has grown to 22 employees, including two current ITCA apprentices, Gareth Evans who works as a plater, and welder, Ryan Carstairs.

Mr Forman, 30, said: “My studies at ITCA were hugely beneficial and the training I received from my mentor, Colin Sherriffs, was absolutely flawless. Without my time as a learner I wouldn’t be where I am today, and I think it is really important to demonstrate the importance of apprenticeships to youngsters, and offer them the same opportunity I was given as gaining this experience will provide them with a huge skillset to launch their future careers.

“2015 is going to be an important year for the company as I will be expanding once again into a new workshop which is more than four times the size of my first base, and I plan to place another two apprentices at ITCA as training our own personnel can only assist with the continued growth of the company.”

ITCA managing director, June Jones, said: “Richard’s experience as a learner means he has a good relationship with his apprentices, and allows him to nurture their skills and pass on his knowledge and experience to them.

“We have actually come full circle as Colin Sherriffs, Richard’s mentor, is now in charge of the apprentice training that is being carried out in the fabrication/welding department at ITCA.

“His success story is truly inspirational and proves that hard work and determination certainly pays off.”

ITCA Training, which is one of the largest engineering apprenticeship-training firms in Scotland is based at Howemoss Drive in the Kirkhill Industrial Estate, Dyce. The facility, which spans almost 22,000sq feet, includes offices, classrooms, a storage yard, and workshop space. The company provides training for young employees in sectors including, welding, fabrication, mechanical engineering, business administration and logistics.

Issued by Frasermedia Ltd on behalf of ITCA Training.