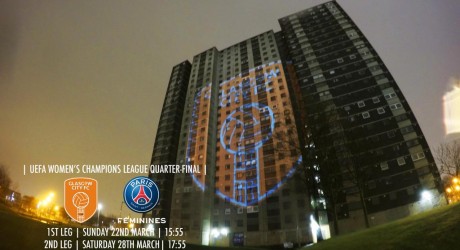 CHAMPIONS League football returns to Scotland this weekend and BBC ALBA has secured exclusive coverage of both legs of the Glasgow City versus Paris Saint-Germain quarter-final tie.

The first leg from the Excelsior Stadium, Airdrie, will be shown on the channel this Sunday, March 22, from 3.55pm. Kick-off is at 4.05pm.

The away leg, as Glasgow make the journey to Paris to face their opponents at the Parc des Princes, will be shown on Saturday, March 28 from 5.55pm, with kick-off five minutes later.

The live coverage of the last eight showdown continues BBC ALBA’s extensive coverage of women’s football, which has included live match action from international and European club matches in recent years as well as factual entertainment programmes, including Honeyballers and Glasgow City FC.

Glasgow reached the quarter-finals following a 5-4 aggregate win over Zurich in the last round, with two late goals ensuring progress in a 4-2 second leg victory at the Excelsior Stadium in November.

Eddie Wolecki Black’s side started their new domestic campaign with a 5-0 away win against Hutchison Vale last weekend but they’ll expect a tougher test against a PSG side that sits top of their domestic league and defeated fellow French outfit, Lyon, 2-1 in the round of 16 to reach this stage of the competition for the first time.

Alan Esslemont, head of content at MG ALBA, said: “We are delighted to be providing live coverage of Glasgow City’s forthcoming Champions League tie against Paris Saint-Germain and we are expecting another exciting tie following Glasgow’s thrilling win in the last round.

“BBC ALBA is committed to supporting both professional and grassroots sport and we are pleased to be able to help women’s football in Scotland reach a wider audience. We are certain our viewers will enjoy the action on the pitch and we wish Glasgow City well in their quest to secure a semi-final spot.”

Coverage of the UEFA Women’s Champions League is being produced for BBC ALBA by mneTV, one of Scotland’s leading sports production companies. (For further information see www.mnetv.tv).