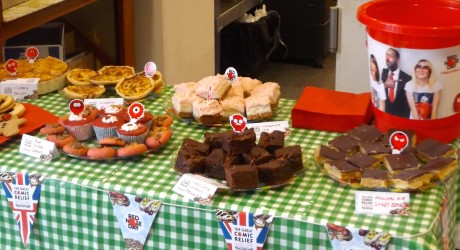 A LEADING North-east builders merchants has raised more than a thousand pounds for charity following their efforts in support of Comic Relief.

Employees from the Westhill and Inverurie branches of GPH Builders Merchants prepared sweet and savory treats as part of a nation-wide bake off for the charity.

GPH customers and staff made donations in return for a sample of the cakes on offer, raising more than £1,100.

The leading independent builders merchants, which offers an extensive range of products to trade and retail customers also hosted an online Red Nose ‘selfie’ competition through its Facebook page.

The firm encouraged people to submit funny photos wearing red noses and/or glasses, with the best shot winning a prize.

Sales and marketing director for GPH, Nikki Mortimer, said: “We support a number of charities, and getting involved with the Red Nose celebrations was a fantastic way of demonstrating team spirit amongst our employees.

“Our selfie competition encouraged people to get involved and we hope also highlighted the importance of the charity. We received some fantastic photos from both staff and customers who were only too willing to do something funny for money.

“We would like to thank our teams in Inverurie and Westhill who took time to bake for the sale, and everyone who gave such generous donations helping to raise a fantastic total for this exceptional cause.”

Issued by Frasermedia Ltd on behalf of GPH Builders Merchants.