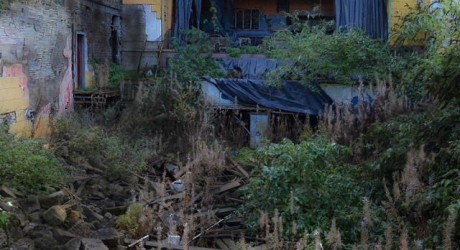 THE Linlithgow Victoria Hall Trust (LVHT) has called an inaugural general meeting (IGM) 31 March 2015 to announce its proposals for a community-owned entertainment complex in Linlithgow’s High Street to replace the historic Victoria Hall.

The IGM will take place at Linlithgow Rugby Club, Mains Road at 7.30pm on Tuesday, 31 March 2015 with a ‘call-out’ for local attendance and support.

Says a spokespersson: “To date, progress towards the ‘Linlithgow Film Theatre’ development of a super new community-owned cinema/theatre complex on the site of the semi-derelict Victoria Hall site has been positively received.

“The first feasibility study by EK:JN Architects for the Linlithgow Victoria Hall Trust, paid for entirely through community donations was completed in January 2015 and it is envisaged that that there will be three auditoria of different sizes, able to accommodate cinema, theatrical and musical performances.”

The spokesperson added: “EK:JN have produced a full sketch design of the likely appearance of the High Street frontage, more in scale with the older adjoining buildings than the existing ones. On the ground floor, there would be three retail units and a pedestrian link to the Peel, the first floor would have a bar/café/restaurant and the upper two floors would include seven one-bedroom flats and these will be on show at the IGM.

“It is also proposed that revenue from leasing out the retail units and the flats would help sustain the financial viability of the cinema/theatre.”

The Trust has around 200 members at present but needs to attract many more, to demonstrate to the National Lottery and other prospective funders that the Linlithgow community is fully behind the scheme.

David Tait, convener of the Trust, said: “We are a voluntary organisation and we are seeking more community involvement and are aiming for 1,000 members.

“We would stress that even if people are unable to attend the inaugural general meeting, we would very much like to see them support us as new members by completing our membership form online at http://linlithgowfilmtheatre.com/igm/ or in our hard-copy form in our magazine supplement.”

All are welcome to attend the IGM and the IGM notice and membership form have already been distributed to all households in Linlithgow. Details of the IGM agenda can also be found online alongside a call for voluntary support and donations to help make the project succeed.

To join the Trust, to offer much-needed assistance, or to make a donation, please contact Ron Smith or Chris Cook by emailing victoria2013hall@gmail.com or phoning 01506 510333.