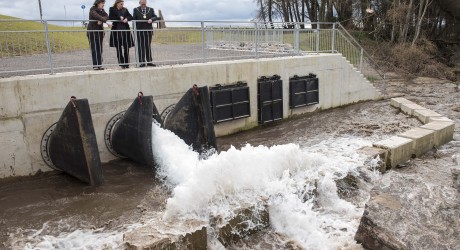 HUNDREDS of homes and scores of businesses are free from flooding – thanks to a £37million scheme that was unveiled this week.

The Forres and Pilmuir scheme completes the flood protection for the town, which has suffered regular inundation from the River Findhorn and Mosset Burn. A £21million scheme on the Mosset was opened in 2009.

The Scottish Government met 80 per cent of the scheme cost, the remainder funded by Moray Council.

“I’m pleased that the Scottish Government has been able to provide 80 per cent of the funding that helped to bring this scheme to fruition.

“This investment demonstrates the Scottish Government’s on-going commitment to do all we can to reduce flood risk in Scotland.

“I’d also like to give credit to the hard work and dedication Moray Council has invested in implementing the scheme with a design that will provide lasting protection against the sort of flooding that has struck Forres in the past.”

The scheme is one of five such projects being delivered in Moray, and at £167 million comprises the largest flood alleviation programme in Scotland.

Says a Moray Council spokesperson: “In addition to the Mosset scheme, two others in Lhanbryde and Rothes have been completed. The final and largest element of the project in Elgin is expected to be completed by August 2015, at a projected cost of £83million.

“The scheme was designed by consultant engineers Royal Haskoning, the main construction contractors were Morrison Construction. Working with Moray Council’s consultancy managers the scheme was brought in nearly £8million under budget and on schedule.”

“On August the 11th last year (my 70th birthday) I spent much of that day watching the Rivers Findhorn here and Lossie in Elgin rise to dangerously high levels,” he said.

“It was nail biting stuff, but both flood alleviation schemes held and the moment passed.

“We estimated that the saving to property and businesses and the wellbeing of our people from that event alone very nearly matched the total cost of both Elgin and Forres schemes, roughly £105million.

“In Forres alone, we estimated that more than 1000 properties escaped the misery and devastation that would have resulted without this scheme, so we know this is a real investment in the safety of our people.”

• Works included widening the flood plain, excavating of 185,000 cubic metres of material; a new bridge extension to span the widened river, creation of a 1.8km bund which involved raising the A96 by 2metres; creation of an automatic pumping system with three huge pumps capable of pumping 1.1cubic metres of water a second, equivalent to 110 Olympic pools a day.

• The catchment area of the River Findhorn is 790 sq km, the same size as Bahrain.