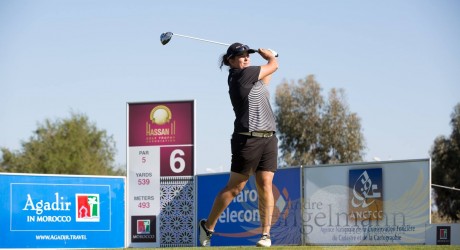 MURCAR Links Golf Club in Aberdeen will be welcoming some of the country’s top female golfers this week as it hosts the Paul Lawrie Golf Centre Ladies Open on 2 and 3 April.

A Ladies Tartan Tour event, the tournament will be Murcar’s first significant competition of a season which will see the club host the European Tour’s inaugural Saltire Energy Paul Lawrie Match Play which will take place from 30 July-2 August.

The PLGC Ladies Open has already secured some of the country’s top talent, with leading Scots players, Michele Thomson, Kelsey MacDonald and Laura Murray, confirmed to compete in the two-day event along with European Tour veterans, Becky Brewerton and Trish Johnson.

Thomson, who has recently returned from a three-month playing stint in Australia, is looking forward to one of her first home tournaments of the year at a course, as a former member, she knows well.

She said: “Having been in Australia for the first few months of the year, it’s nice to have a tournament a bit closer to home. I played a lot of golf ‘down under’ and I’m bringing back a lot of confidence so looking forward to playing on a course I’m pretty familiar with. I also played in Morocco before heading back and I’m feeling really good about this week.

“The Ladies Tartan Tour offers a great challenge in between my Access Series events and I’ll keep plugging away to finish top five in order to get full Tour rights next year. That’s obviously my season-long goal, but I know each tournament I play in is extremely important and I’ll be playing with that in mind over the two days.

“I was lucky enough to have played Murcar recently, so the course is looking fantastic and deserves to be holding bigger tournaments. I was really pleased to hear the club and Paul (Lawrie) had secured the Matchplay event. It’s a great accolade for the club and demonstrates how much Paul does for local golf. I’ve certainly benefitted from being a part of the system up here and Paul has offered great support as I’ve developed as a golfer.”

As well as the Ladies competition, Murcar will also be hosting a PGA Seniors contest on 2 April with former Ryder Cup player, Ronan Rafferty, and fellow former European Tour stalwart, Andrew Oldcorn, some of the big names lined up for the day.

Speaking of the upcoming events and one of the biggest years in the club’s history, Malcolm Gunnyeon, club captain of Murcar Links Golf Club, said: “It’s an unbelievably exciting period for the club and hosting the Ladies Open is a great way to start the season.

“Bob Mackay and his team have done an excellent job of developing and maintaining the course and I’m sure competitors from both this week’s Ladies and Senior competitions will enjoy the challenge. It really is in superb shape.

“The fact we are being given the opportunity to host such events is testament to the reputation the club holds within the domestic and continental golfing communities.

“Hosting the Saltire Energy Paul Lawrie Matchplay, in particular, is a wonderful opportunity for Murcar to show what it can offer as an elite golfing venue and we are working hard to ensure members are fully engaged with the planning and organisation.

“We have already launched a campaign to recruit 300 volunteers for the event and the initial response has been very positive. Murcar is a very special club and we look forward to showcasing it on such a grand stage.”

The Paul Lawrie Golf Centre Ladies Open takes place at Murcar Links Golf Club on 2 and 3 April. Entry is free for spectators for the both the Ladies Open and the corresponding PGA Seniors competition on Thursday 2 April.

To buy tickets for the Saltire Energy Paul Lawrie Matchplay go to http://www.paullawriematchplay.com.

The Murcar Championship Golf Links has a par of 71 and a standard scratch rating of 73 (USGA rating 72.7 and USGA slope rating

The format of the Saltire Energy Paul Lawrie Matchplay will have 64 of the top European Tour players competing for a share of the €1 million prize fund. The new tournament, which is part of The Race to Dubai and is being spearheaded by Ryder Cup legend and major champion, Paul Lawrie, will be shown live on Sky Sports.

Limited membership and life memberships available before joining fee introduced in 2015. Contact The Secretary on 01224 704354 or golf@murcarlinks.com for further details.