Media Release: Are you a monkey or a lizard? – Science Festival hears how new resource aims to help families manage arguments 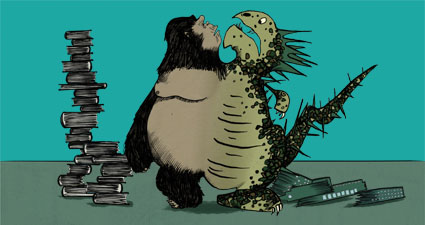 AVOIDING family arguments over the remote control or mobile phone use could become a reality with the launch of a new resource today (Monday) to help people learn more about the science of their brain and the role it plays in household conflict.

Audiences at the Science Festival will be the first to try out a new way to learn how to better manage family arguments tonight (Monday), as leading professionals join forces to promote a newly designed online resource to ‘mainstream’ conflict resolution and mediation tools.

The new resource challenges people to learn more about the way their brain works and how deeply-engrained early experiences can shape the way they deal with conflict at home.

The new ‘Monkey v Lizard’ quiz – which can be found at http://bit.ly/TestMyBrain – has received the backing from doctor and medical advisor, Dr Sara Watkin.

It was designed by Scotland’s first-ever national mediation resource centre, the Cyrenians Scottish Centre for Conflict Resolution (SCCR). (1) The SCCR marks its first year in operation this month.

Says a spokesperson: “The development of the resource comes off the back of successful training sessions run by the SCCR to help parents, young people and professionals across Scotland to better manage conflict. In its first year, the charity has run 53 sessions, with 730 attendees, and 83 per cent of those say they felt more confident in dealing with family conflict resolution. (2)

“And the initiative it is part of the SCCR’s national campaign to raise awareness of conflict at home and the impact on young people and their families. Every year in Scotland, 5,000 young people become homeless because of family relationship breakdown.| (3)

The new resource will be launched at the Science Festival event – Because You Know…It’s All About That Brain – which will look at the causes and effects of conflict and the role the brain plays in it.

Users will be led on a journey to discover what part of their brain they use when arguing, before being provided with more serious tools and tips on how to better resolve differences and access new ways of thinking. (4)

Key areas of our brains are The Old Brain (lizard) and The New Brian (monkey). The Old Brain, determines our reactions and protects us from danger (our ‘fight or flight’), while our New Brain is what allows us to reflect, be aware and assess our reactions.

The new online quiz shows that, while important to keep us safe in certain circumstance, too much lizard (Old Brain) can lead to conflict escalating. By learning to access our monkey (New Brain) we are more able to do things to reduce conflict, for example, listen, reflect, empathise and communicate.

Diane Marr, network development manager at the SCCR, explained the thinking behind the resource: “We all have a drugs cabinet in our brains.

“Conflict releases the fight or flight hormones, adrenaline and cortisol. That’s great if we’re a solider at war, or a football player going for the winning goal. But not when we’re trying to decide which programmes to watch on TV, for example.

“We can try to change the way we deal with arguments. We can learn to cuddle our inner monkey and care for our lizard better. We can reduce the stress and anxiety we feel when experiencing conflict and do things in a new and different way.”

She added: “Every year thousands of young people become homeless because their relationship with their family breaks down – but they are just the tip of the iceberg of those struggling to deal with conflict.

“Through this resource, website and our national campaign we want to find ways to engage young people and families to take a look at how they can stop, talk and listen to each other better.”

“Professional and those working in conflict resolution have known about phrases and tools like de-escalation but what that’s about is learning how to breathe, take a break, go for a walk and learn to listen. We want to try to mainstream these tools to help families. By leaning ways to be more Monkey, we can learn more about ourselves, our emotions, responses and relationships.”

Medical advisor, Dr Sara Watkin, has given her backing to the SCCR’s newest resource. At tonight’s Science Festival event, she will be joining the SCCR onstage to talk through the physical and emotional impact of conflict and how it connects to the brain.

She said: “Most of us want to live amongst calm people, not hot heads. But to produce generations of sorted-out individuals, the people caring for infants must be able to open up to those babies and infants.

“Parents and babies share rhythms. The delight heard in the giggles that emerge at around three months corresponds to structural brain developments. This ‘you delight in me’ conversation nurtures confidence. It is the basis for forming relationships that matter.

“Get this wrong (or don’t get it at all) and you are on a path to producing people who don’t feel safe. It may seem as though there is no quick fix for resolving conflict. But we need to try.”

The ‘Monkey v Lizard’ initiative is part of the SCCR’s wider ‘Stop. Talk. Listen’ campaign, which aims to get people thinking about how they can stop, talk and listen to avoid longer term resentments and fall-outs.

The campaign aims to put conflict resolution and mediation on the agenda, similar to the changes in attitudes to mental health, and give families and practitioners working with young people the tools to help deal with arguments in the home.

1. The Scottish Centre for Conflict Resolution is Scotland’s first ever national mediation resource centre. It is a national resource promoting and supporting best practice in family conflict resolution and early intervention. It aims to improve relationships and lives and reduce youth homelessness by addressing the biggest cause – relationship breakdown.
2. The SCCR launched in early April 2014. Since then over 53 training sessions delivered to over 730 attendees (544 prof, 140 young people, 52 parents/carers) across 25 local authorities. 88 per cent of delegates had an increased skills base in relation to family conflict resolution. 87 per cent had an increased knowledge base in relation to family conflict resolution. 83 per cent of delegates feel more confident post training about dealing with family conflict resolution.
3. In 2013/14, 8,435 young people (16-24 year-olds) were assessed as homeless or potentially homeless figure, of them 4,750 became homeless due to relationship breakdown. Source: Scottish Government.
4. Journalists looking to attend the event should speak directly to Science Festival media team on 0131 226 0014.
5. Edinburgh Cyrenians is an independent Scottish Charity (number SC011052) with an outstanding track record in pioneering creative solutions to the contemporary problems faced by people on the margins of society, such as; homelessness, poverty, unemployment, recovery from addiction and recidivism.
6. Edinburgh Cyrenians run a range of services including residential communities for young people to gain life skills, homeless prevention services, conflict resolution services including Amber and tenant/landlord mediation, a farm which is a social enterprise, and a range of services supporting people into employment.
7. Edinburgh Cyrenians Trust was formed in 1968 by local people out of concern for the evident problem of homelessness in Scotland’s capital city. Although sharing the name, ‘Cyrenians’, with other groups in Scotland and the UK, there are no operational links.