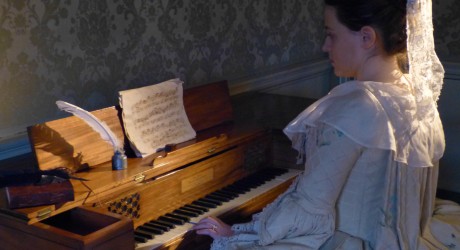 GLASGOW Films’ controversial documentary, ‘Written by Mrs Bach’ – which argues that some of Johann Sebastian Bach’s most-famous works may be attributable to his second wife, Anna Magdalena – picked up a World’s Best Gold Medal in the ‘Arts’ category at the prestigious New York Festivals Awards ceremony hosted by the National Association of Broadcasters of America in Las Vegas, Nevada, last night.

Glasgow Films was represented at the awards ceremony by a main contributor to the documentary, Heidi Harralson, Associate Professor of Criminal Justice and Criminology at East Tennessee University and one of the leading forensic document examiners in the United States.

It was she who corroborated the findings of Professor Martin Jarvis, the forensic musicologist from Australia whose book laid the foundation for the film.

Ms. Harralson said: “This film has shown the value of science as applied to the arts and has gone a long way towards opening the door for women previously hidden from history.”

The film, recently shown on BBC 4, is written and produced by Robert Beedham, narrated by Glasgow-based composer, Sally Beamish, and directed and produced by Alex McCall of Glasgow Films.

This award is a second triumph for ‘Written by Mrs Bach’ and Glasgow Films.

The documentary has already won an Award of Excellence at the IndieFest in California.