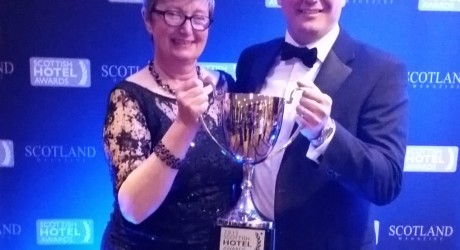 AUCHRANNIE Resort (www.auchrannie.co.uk) on the Isle of Arran has been named Hotel of the Year at this year’s Scottish Hotel Awards.

Auchrannie was competing with hundreds of other hotels from every corner of Scotland and the decision to award the top hotel trophy to Auchrannie was the decision of an expert panel and mystery judges as well as comments and feedback from the general public.

Linda Johnston, executive director, who collected the award, said afterwards: “This is a huge accolade for the entire team. I think everyone in the industry recognises this is one of the most prestigious awards that we could possibly win. The fact that we have achieved it is an outstanding honour for everyone involved in Auchrannie.”

Richard Small, general manager, added: “Auchrannie has grown from a small guest house 27 years ago to a full-scale resort with 85 bedrooms and 30 luxury lodges. But no matter how much we grow, we continue to put delivering five star customer service at the heart of our operation.”